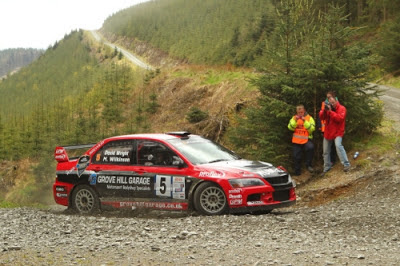 Bentham’s David Wright got his rally season back on track in style at the weekend with a convincing class win on the Plains rally, round 4 of the BTRDA rally championship.


After disappointing retirements on the Malcolm Wilson rally in March and the Tour of Hamsterley in April Wright was keen to put in a strong performance on the Welshpool-based event in his Kumho Tyres, Proflex, Drenth, York Brewery, Millers Oils, Owen Developments and Grove Hill Garage-supported GPM Mitsubishi Evo 9.


The rally started with stages in Dyfi and Gartheiniog and Wright was immediately on the pace, setting fastest time in his class as well as mixing it with the more powerful World Rally class cars at the top of the leaderboard.


Despite a slight misfire Wright maintained his class lead after stages three and four in Hafren and Sweet Lamb. The final two stages were troublefree and Wright pushed extra hard in the last stage to set second fastest time overall.


“We had a good rally, it was a great feeling to get a decent result after everyone’s hard work in getting the car right after our accident in March,” said Wright. “The pace of the rally was really quick from the start, the dry and grippy surface suited the World Rally class cars so it was very difficult to beat them.”


“I’m very happy with the class win though and we also finished fourth overall so we get a good haul of points for the championship.”


Wright will continue his BTRDA championship campaign with the Dukeries rally next month.
Image courtesy Simon Clarke
Posted by GS at 22:22