Success on the world stage for rally driver Rodgers It had been Rodgers’ lifelong dream to compete on the event but two days before the start it looked like his dream would be over. All the cars taking part must pass a very stringent scrutineering check to ensure they are safe to compete and that they comply with the many regulations and homologation rules.  Unfortunately, along with several other machines, Rodgers’ car failed the test on technical grounds. The TimSport team were up all night working on the car, including a 140 mile journey home for parts.

The car was re-tested but still the event scrutineers were not happy, stating that the seat rails were 8mm undersized. With the correct seat rails not available to purchase, Rodgers had to call upon Ford’s world championship rally team M-Sport to fabricate a set of rails in the event service area.  After eight hours work these were fitted and the car finally passed scrutineering at 6:30 on the morning of the rally.

With just a couple of hours sleep in two nights Rodgers was not in an ideal position to be starting three days of hugely tough competition but, unlike many of his rival crews, he successfully completed the six stages of the opening day with the car needing nothing more than a precautionary balljoint change in service. Despite his lack of sleep Rodgers ended day one in second place in the Co-Part Fiesta Trophy, a category within the event for all those driving a Fiesta ST.

“We didn’t have the best of starts,” said Rodgers. “The scrutineering is always very tough on a world championship event and we had several issues to sort out. The car still wasn’t ready for the ceremonial start so my co-driver Stefan Arndt and I were forced to walk over the start ramp with no car. Thanks to the M-Sport team we managed to sort out the seat rail issue which meant we could start the action on Friday morning.”

“The stages went pretty well really. Conditions were awful but I quickly got used to them. It didn't feel like it had been well over a year since I last drove in a rally. We had a great battle with the other Fiesta STs and were just 2.7 seconds behind the leader at the end of the day.”

Day two was the longest of the rally with nine stages running from early hours of the morning right through to late evening. Rodgers again went well, his pace only dropping on the last two stages as tiredness kicked in. He did enough to lead the Fiesta Trophy as well as lying fifth in class despite being up against much more modern and powerful opposition.

“The weather continued to be very challenging, it rained pretty much all day and the stages were very slippery. Lots of cars were crashing out but we managed to keep going. We had a few issues with the suspension but we kept putting in good times and moved into the lead of the Fiesta Trophy. Tiredness was a real factor on the last two stages though, I was struggling to take in the notes from Stefan and the stages were very rough, I was pleased to get back to service at the end of the day."

A third day of wind and rain greeted the crews on Sunday as they faced four more stages, including a run around the tarmac of the Great Orme near Llandudno. Despite almost putting the car in a ditch on the Brenig stage Rodgers managed to bring the car home to the finish in Deeside. As well as winning the Fiesta Trophy he also finished fifth in class and 38th overall. 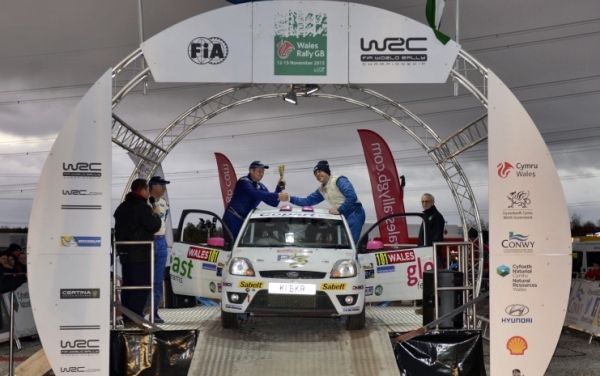 "I'm absolutely delighted with the result, especially after all the issues before the event. It's been a rollercoaster of emotions from the despair at scrutineering to the elation of finishing. I'd like to thank all the team for their help and support before and during the event and all my sponsors without whom I'd not have been able to afford to take part. Competing on Rally GB was my dream and I'm over the moon to say that dream has been fulfilled."
Posted by GS at 20:48 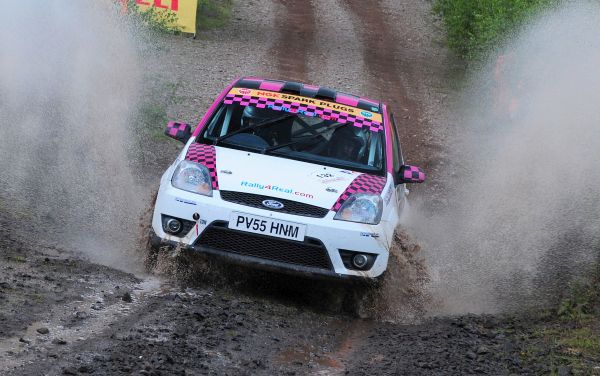 Rally driver Tim Rodgers, from Burton upon Stather, is set to fulfil a lifelong dream when he takes part in Britain’s round of the World Rally Championship, Wales Rally GB. Rodgers will drive a Ford Fiesta ST in what will be the last time such a car is seen at world championship level as its homologation expires at the end of the year.
Rodgers used the car in both 2013 and 2014, competing in British Rally Championship events. However, a big accident on the Scottish rally severely damaged the car and he has not been in action since.
The campaign to do Rally GB started in May when Rodgers realised that 2015 was that last year that Fiesta STs would be allowed to compete in world championship events. It had always been his dream to compete on Rally GB but the massive budget needed to take part seemed out of reach. However, with no chance of upgrading to a current specification car, if he didn’t take part in the 2015 event then he’d probably never get the opportunity again so a plan was hatched.
“The car was in a sorry state after the crash on the Scottish and it sat in my garage for many months awaiting repair as other things took priority,” said Rodgers. “On realising the 2015 event was the last chance to use the ST I started making plans to get the car back on the road and raise the funding to take part. This was in May so there was only six months to pretty much build a new car, a tough task given all the work had to be done in my spare time.”
“I sourced a Fiesta road car and the long process of bringing the rally car back to life began. It’s taken a while but I’m down to one A4 sheet of jobs now so we will definitely be ready to cross the Rally GB start line in Llandudno.”
“We’ve had a few setbacks on the way, the main one of which was some major sponsors withdrawing from the project last month which left us with a large financial hole. After discussions with my co-driver Stefan Arndt we decided to press on with the plan to compete.  Fortunately I’ve been able to attract support from RoLEC, FMS Autoparts, Business 101, Sabelt, Peart Auto Services, The Tortoise Shop.com, Maple Garage Ltd, Glow Feast and JFK and I am extremely grateful for that. If anyone else would like their business promoted on a world championship event please get in touch with me via my TimSport Facebook page (www.facebook.com/timrodgersrallying).
“The car has done Rally GB before, my wife Becky Kirvan used it to win her class on the 2011 event. It’s also been used on other world championship rounds by a previous owner so I’m hoping I can give it a fitting send-off at world level - I'm definitely under pressure to get a good result after Becky's class win! I think we'll be the first husband and wife to have both competed on the event in the same car but in different years.”


The rally has a ceremonial start in Llandudno town centre on Thursday 12th November and then three days of tough competition start the day after. In total the crews will race on almost 200 miles of slippery forest gravel tracks in notoriously tricky conditions.  The reputation of the changeable British weather is second to none in the WRC calendar!
“The events I competed in during 2013 and 2014 were 50-60 miles long so it’s going to be a challenge doing almost four times that mileage in one event but I’m confident both the car and crew will be up to the task."
To follow progress on Rodgers' preparations to get updates from the event itself please visit www.facebook.com/timrodgersrallying.
Posted by GS at 11:57