Another successful year for Rally2Raise 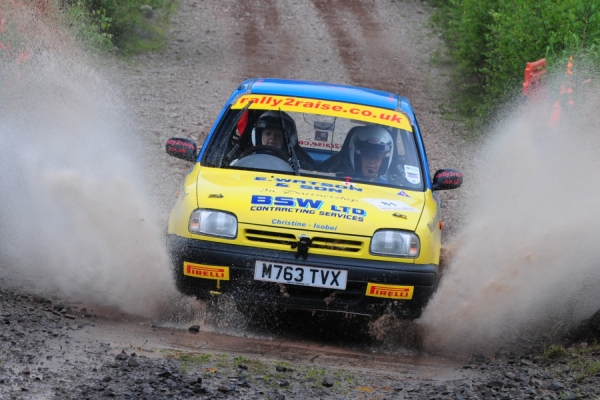 The Rally2Raise motorsport team had another successful year in 2013 when it raised over £1,400 for the Nystagmus Network and contested four rounds of the Scottish Rally Championship (SRC).

The team was formed in late 2011 with the aim of raising funds and awareness for charities. The first full year of the project saw over £2,500 raised for four charitable causes. For 2013 the team decided to continue supporting one of those causes, the Nystagmus Network. Nystagmus is a presently incurable eye condition which Rally2Raise founder Rachel Clark’s son suffers from so it is a cause particularly close to her heart.

The team’s season started with the Saltire Classic rally in March. The organisers, the Saltire Rally Club, supported Rally2Raise in 2012 and they kindly continued their support this year. Rachel drove the Rally2Raise Nissan Micra as course car on the event with Gary Simpson making his debut in the navigator’s seat. Despite severe exhaust manifold problems they managed to get to the finish where plenty of cash was raised with a raffle.

Following the Saltire rally the hunt was on for sponsorship to enable the team to run in selected Scottish Rally Championship rounds. Thanks to the support of E.Watson and Son, BSW Ltd Contracting Services, Pirelli, AW Motorsport, McPherson Document Solutions, Charles Derby Ecosse, San Juan Services and Halo Lettings, Rachel and co-driver Katherine Begg were able to enter the Granite City rally in April. A strong run on the events first two stages was sadly ended when the car clipped a bridge and bent the rear beam, forcing retirement.

The team’s next event was the Scottish rally in Dumfries. With Katherine suffering an illness Caroline Lodge took over on the pacenotes. A brilliant performance saw Rachel presented with the trophy for being the fastest lady driver at the events ceremonial finish in the town centre in front of a large crowd of spectators.

Following the Scottish the team contested the Elgin-based Speyside Stages rally. Although the car suffered major gearbox problems Rachel brought it home for another good result.

The team’s final event of the year was the Merrick Stages which used the classic Scottish rally stages around Newton Stewart. The season was rounded off in great style with a second in class finish.

Fundraising events, including a virtual navigational rally, continued after the Merrick and thanks to the generosity of those who supported the project the total raised was over £1,400.
“It has been another good year for Rally2Raise,” said Rachel. “The rally community has once again been hugely generous in supporting us and I am very happy that we’ve managed to raise almost £4,000 for charity in two years as well as raising awareness of lesser known causes such as the Nystagmus Network.”
“Thanks to the amazing help given to us by our sponsors we were able to contest four Scottish Rally Championship events and I’m pleased with how those went. It’s difficult trying to compete with cars that have two or three times the power of our Micra has but it was great fun trying and we got some good results.”
“We’re planning to continue with Rally2Raise in 2014 but we’ll have to see how the rally budget goes before deciding whether to compete on any SRC events. The Saltire Rally Club have kindly invited us to be course car on the Saltire Classic event again in March though so we'll definitely be doing one rally.”
“I’d like to thank our sponsors whose support enabled us to contest the events and also everyone who has donated money and taken part in our fundraising activities.”
For more information please visit www.rally2raise.co.uk or www.facebook.com/rally2raise.
Posted by GS at 18:51