The series, which is Britain’s premier offroad racing championship, kicked off in April with a round in mid-Wales. The team’s season got off to a good start as they finished second, a result that was repeated at round two despite their car suffering some electrical troubles.

Problems with the oil seal on the engine meant the team failed to score at round three in Scotland and, with their closest rival winning each of the opening three rounds, it looked as though their hold on the championship was slipping.

However, victories at round four and five saw Rochelle and Hammond head to the last round in South Wales needing to finish in the top three to retain the title. Torrential rain before the event made the conditions on the 7 mile offroad course treacherous and Rochelle drove within himself to hold third place early on. He was promoted to second after a rival driver lost a lot of time when his steering failed and he held this position to the end of the event’s 13 runs to take the championship win.

“I wasn’t really racing on the edge this weekend,” said Rochelle. “A third place was sufficient and, with the very slippery course, I did not want to risk putting the car off the road by driving at my usual flat-out pace.”

“It is absolutely brilliant to win the championship again, it’s been a very tough year so to finish with the victory is fantastic. It has been a real team effort with Chris putting in a lot of work behind the scenes as well as navigating, Roy Millington producing a brilliant engine and Tim Henry doing a great job as our team mechanic, it’s an all Bridgnorth team and we’re brimming with pride."

“The championship has been a very thorough test of our car with six cracking courses through the year, we’ve had everything from extremely tough offroad sections to fast gravel tracks. To end up as championship winners is a real achievement for all the team.”

The 2013 championship will start next April although Rochelle has not yet decided if he will go for a hat trick of title wins.
Posted by GS at 19:47 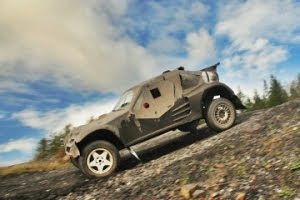 Please click here to see the images.
Posted by GS at 08:47

2012 BRC Challenge champion Richard Sykes will finish his rally season next weekend with the notoriously tough Mull Rally in Scotland.

Sykes completed his BRC Challenge season at the end of last month on the Trackrod Challenge rally. Despite a traumatic first stage in the dark of Dalby forest which saw him lose over 12 minutes to the leaders after first hitting a log and then getting stuck in a ditch Sykes battled back with quick times on the rest of the stages to finish second in class in his Bathams Brewery, G I Sykes Ltd, Boroughbridge Marina and Silverstone Tyres-supported Citroën C2 R2 Max.

“The first stage on the Trackrod was a disaster,” said Sykes. “We were first car on the road and we hit a log that was propping up a direction arrow. The log got wedged under the car and we dragged it down the stage for around four miles. It only got dislodged when we threw the car sideways on a corner.”

“Further on in the stage we went off the road and into a ditch. Fortunately a group of spectators were on hand to extract the car but we lost a lot a time and were right at the back of the leaderboard.”

“I drove as hard as I could for the rest of the event although the exhaust cat had got flattened by the log so the engine was at least 30bhp down on power. I was pleased to still finish runner-up in the class despite our problems although I would’ve liked to end our championship winning season with a another victory.”

After the forests of Yorkshire it is back to tarmac for the Mull Rally, the event being held on the closed public roads of the Isle of Mull. Sykes contested the event in 2010 and did well to finish after an opening stage off. He is hoping for a good result this year.

“I thoroughly enjoyed the 2010 event, the Mull Rally is a huge challenge as most of the competitive mileage is at night. The roads are very narrow and twisty with a lot of jumps to catch out crews. It’s a real achievement to get a finish there and hopefully we will achieve that.”

The Mull Rally starts on Friday night from Tobermory with the crew competing right through to the early hours of Sunday morning. 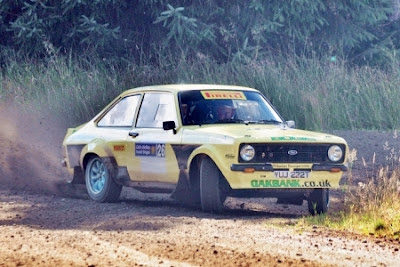 Please click here to see the images.
Posted by GS at 22:47

The Rally2Raise team of Aberdeen’s Rachel Medich and Morecambe’s Katherine Begg enjoyed a very successful end to their rally season when they won the fastest female crew award on the Colin McRae Forest Stages as well as finishing 43rd overall and 6th in class.

The Aberfeldy-based event started with the Craigvinean and Griffin stages and, with the exception of a near miss when half-spinning at a bridge in the opening stage, Rachel and Katherine had a clear run in their Clark Motorsport and DMACK Tyres-supported Nissan Micra 1300.

“The first two stage were pretty slippy so I concentrated on getting through unscathed,” said Rachel. “Despite this we almost hit a bridge in Craigvinean after the rear of the car slid around. Fortunately I got the car stopped just in time.”

After a service halt in Aberfeldy the crews headed to Errochty which, at over 13 miles, was the longest stage of the rally. Rachel and Katherine had another good run and moved 7 places up the leaderboard. Stages in Kindrogan and Black Craig were next and these proved to be very difficult with several crews retiring after going off the road or having mechanical problems. The Rally2Raise Micra powered through with no problems, even catching and passing a car in Black Craig.

“Errochty was my favourite stage of the event, it was great fun. Kindrogan went ok but Black Craig was extremely slippery and there were a few cars off the road so we took it fairly steady in there.”

The rally ended with a second Craigvinean stage. The Micra was very down on power and struggled to get up the hills in the stage but it got through the 11 miles of tracks and made it back to the event finish in Aberfeldy.

“The last stage was difficult for us, we do not have much power so we cannot afford to lose any. The car was spluttering and misfiring and the engine had no pull at all. I was relieved to get to the finish. We think it’s an issue with the fuel pressure so hopefully it can be sorted out. I was delighted to win the award for first female crew home, it’s a really nice way to end my first season as a driver.”

“Thanks to the organisers for the event entry and thanks also to everyone who supported the Rally2Raise charity raffle on Friday.”

Although competing is over for 2012 the Rally2Raise project continues with raffle tickets available from www.rally2raise.co.uk for the prize draw which will take place on 1st December at the SRC awards presentation night. The prize list now includes a large framed photograph signed by Sebastien Loeb, a subscription to Motorsport News, DVDs from Duke, loads of Tunnock’s products, a motorsport figurine from Out of Caricature, mugs from Motorsport Mugs and items signed by Colin McRae, Mikko Hirvonen and Jari-Matti Latvala. All proceeds from the raffle will go to the charities that Rally2Raise is supporting.

Please visit www.rally2raise.co.uk or www.facebook.com/rally2raise for more information on the project. 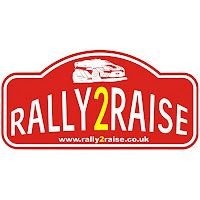 Rally2Raise team driver Rachel Medich is all set to complete her first season in the driving seat of her DMACK and Clark Motorsport-supported Nissan Micra 1300 at next weekend’s Colin McRae Forest Stages rally.

Rachel, from Aberdeen, and co-driver Katherine Begg are looking to build on their excellent finish in the Merrick Stages rally in early September with another good performance on the Aberfeldy-based event which is the final round of the Scottish Rally Championship.

To support the Rally2Raise project the event organisers, Coltness Car Club, have given the crew an entry to the rally which will help the team raise awareness of their supported charitable causes.

“It is extremely generous of the club to donate an entry to us,” said Rachel. “It’s a rally I have rescued on many times and it is amazing that I will be competing this year.”

“We’ll be aiming to get to the finish as we did on the Merrick, I’m still learning about driving and Katherine has only done one full event on the notes so we’re still beginners. It looks like the route will be very challenging so we’ll be delighted to arrive at the finish in Aberfeldy.”

The rally starts on Saturday morning with the crews facing 45 miles of competition in the forests of Perthshire.

As well as competing the team will be at rally headquarters on Friday (5th October) selling the popular “McRae: Rallying’s Most Spectacular Icon” bookazine as well as tickets to for the Rally2Raise raffle which includes items signed by WRC drivers, a subscription to Motorsport News, DVDs, mugs, a motorsport caricature figurine and framed photographs amongst its prizes.

For more information please visit www.rally2raise.co.uk or www.facebook.com/rally2raise.
Posted by GS at 20:08