All change for rally ace Sykes 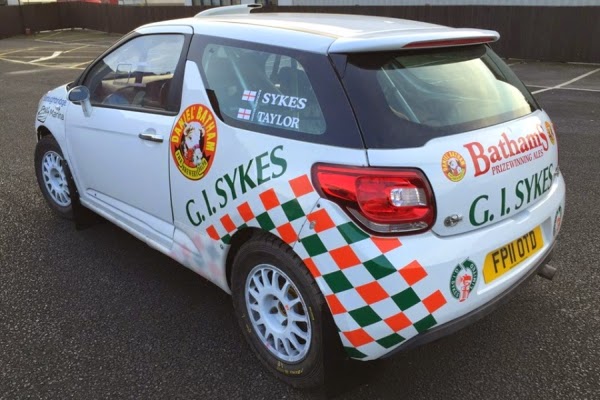 It will be all change this season for Stourbridge rally driver Richard Sykes as he embarks on a new championship challenge in a new car.

After several seasons driving a Citroën C2R2 Max in the British Rally Championship Challenge, including a title win in 2012 and runner-up spot in 2013 and 2014, Sykes has acquired ex-DGM Citroën DS3. He will competing the new BTRDA Mixed Surface championship and the car will be supported by G I Sykes Ltd, Boroughbridge Marina, Bathams Brewery and Body Clinic.

“The British Rally Championship is not running this year and it was an ideal time to change the car, giving us a year to learn about it so we can hit the ground running when the championship returns in 2016,” said Sykes.  “The DS3 is amazingly quick and the technology is fantastic as it enjoys a great deal of the electronics developed in the World Rally Championship. It has been the car to beat at the top level of UK rallying for the last three years.  They have to be one of the most competitive 2wd cars in the rallying world at the moment on both gravel and tarmac, not only here in the UK but also around the globe.”

“It’s quite a big change for me, I have a lot of things to learn such as driving a left hand drive car which I’ve not done before, a 6 speed electric gear shift and an engine that only revs to 4000rpm. The engine has 350 lbs of torque though and provides amazing pulling power. The handling is just amazing.”

“The Mixed Surface championship should be good, it’s got a mix of forest and tarmac events including an enjoyable trip to the Isle of Man which is one of my favourite places to go rallying. It will definitely provide a tough test of both car and crew. We don't know who we'll be up against yet but I think there'll be some close competition.”

The championship will start in April but Sykes has entered the Riponian rally at the weekend so he can get used to the car. He is also planning to enter Rally North Wales in March too for an attempt at the “Road to Wales” initiative which has a free entry to Rally GB as a prize.


“We’ve done one test session in the car already and it went fantastically well but you can’t beat being out there competing so I decided to put an entry in for the Riponian. I’ll have Simon Taylor back as my co-driver for our tenth season together. It will be the first time out since our huge accident on the Ulster rally in 2013 so the event will give us a chance to get used to each other again. I can’t wait to get our season started.”
Posted by GS at 19:19