Two of the most successful competitors in the five-year history of the Roger Albert Clark Rally are gearing up to challenge for overall glory on the 2009 event. David Stokes (Dursley) and Jeremy Easson (Oakham) will both compete in Mk1 Ford Escorts and each driver has an overall podium finish as their target.

These two drivers have an impressive record on the event and have provided the highest-placed Mk1 Escort on four of the five previous Roger Albert Clark Rallies. Easson has been an overall podium finisher four times in five years and cruelly lost overall victory on the final stage of the 2006 event.

Stokes, meanwhile, finished second in 2008 to Malcolm Wilson to record his best result to date. Both drivers have supported the event since the beginning and will be at the head of the action when the 2009 rally starts from Pickering (North Yorkshire) on Friday 13 November.

While Easson is well advanced with the preparation of a fresh car for the event, Stokes will campaign the familiar Mk1 that has taken him to the category two title in this year's Dunlop/Gambia MSA British Historic Rally Championship. A month before the Roger Albert, Stokes and his regular co-driver Guy Weaver will bid to add the Welsh Historic title to their tally for the season.

Easson plans to run a shakedown rally in his new car ahead of the four-day event. "We want to be at the front end of the RAC," he said. "We’ve come close, but there are more and more competitive drivers coming to do it now. It’s a long event, but to be in a winning position you’ve got to have the right sort of kit nowadays. I like the idea of staying in category two with a Mk1 rather than going for a Mk2," he added.

With entries for the main event already at 40 cars, Stokes and Easson are two of the significant entries yet to be lodged for the rally.

For more details about the Roger Albert Clark Rally, please visit www.rogeralbertclarkrally.org
Posted by GS at 22:30

Images from Britpart BCCC round 4 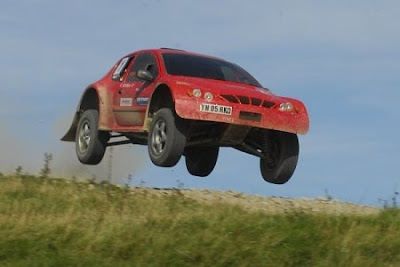 CLICK TO SEE THE EVENT GALLERY
Posted by GS at 00:14

After almost 100 miles of competition at the Sweet Lamb rally complex Dan Lofthouse took victory in round 4 of the Britpart MSA British Cross Country Championship by just 12 seconds from Richard Kershaw with Martin Gould taking a fine third place.

Winner of the previous two rounds Tim Dilworth led after the opening run but his hopes of taking a third win were wrecked when his Peugeot 206 suffered a propshaft failure near the start of the fifth run. The resulting stage maximum dropped Dilworth down the leaderboard.

With Dilworth out of contention a three-way battle for the lead ensued between Lofthouse in his Lofthouse Proto LD4, Kershaw’s GSR 206 Evo 9 and the Monaghan R5 of Gordon Monaghan. Monaghan had previously contested the championship in 2007 and he was immediately on the pace of the leading crews, although as he had only entered to contest day one he was not in contention for overall victory.

At the end of the ten runs of day one Huddersfield’s Kershaw led the event by 25 seconds from Lofthouse with Monaghan in third.

Day two started with patchy mist on the course although this did not prevent the leaders from setting a scorching pace, Kershaw and Lofthouse separated by just two seconds over the six mile stage.

The second run of the day saw Kershaw’s car suffer a misfire due to a faulty coil pack. The problem was to continue up until the last run when a replacement part was sourced from another competitor but by this time Lofthouse had a lead of 18 seconds which was too much for Kershaw to make up.

Despite his misfortune Kershaw was pleased with his result. “It’s been a fantastic weekend, I’m happy with second place, we were lucky to finish with the problem we had,” he said. “The course was brilliant, really enjoyable and quick.”

Winner Lofthouse was delighted with the victory. “I’m over the moon, we’ve had a good weekend with no major problems. It was an awesome course in awesome weather.”

Bob Seaman took victory in Trophy class in his Milner R4 with Neil Davey winning the Clubman event in his GSR 206 Evo 9.

Martin Shaw and Ian Prout will contest the 2009 Roger Albert Clark Rally in Shaw's well-known Ford Escort Mk2, and Shaw says that the event is the closest rally to the original Lombard RAC Rally he tackled three times in the 1990s.

"The entry is in and the team is keen to do it again," said the Huddersfield-based driver, who tackled the Roger Albert Clark for the first time in 2008 in his 1400cc Escort Mk2. Partnered by Dave Evans, he finished fifth overall in the Open category and won his class by a substantial margin.

Now, Shaw and regular co-driver Prout are gearing up for the 2009 rally. "We committed to this year's event right at the start," said Shaw, who competed on the Lombard RAC Rally in 1994, 1995 and 1996 in a Lada. "The Roger Albert is the nearest you can get to that event. We marshalled on the earlier Roger Alberts and my service crew was really keen to do the event. Last year we got round with barely putting a spanner on the car."

For Prout, it will be a switch from reading route notes to working from maps. "He's got to learn how to do maps again," said Shaw.

They are hoping to contest the Trackrod Rally Yorkshire in late September as a final shakedown ahead of the November event.

For more details about the Roger Albert Clark Rally, please visit www.rogeralbertclarkrally.org
Posted by GS at 22:22

The Ludlow-based event kicked off with two forest stages to the east of the town. Burton and Rogerson stormed through the opening test setting quickest time but oil pressure problems in the second stage saw the car engine cut out losing the crew time and dropping them down the order to 12th.

The problem occurred again in the third stage with more time lost trying to restart the car. However, they were still quick enough to move up to ninth on the overall leaderboard.

A troublefree run on the fourth stage saw Burton and Rogerson set quickest time, moving them up to fourth.

“The problems in the second and third stages were very frustrating, the engine cut out and it was difficult to get it restarted with it being hot,” said Shelley.

The remaining three stages of the event took place near Ludlow and a charging Burton took two more fastest times to end up third overall at the rally finish.

“The last three stages were brilliant, really quick. We’re pleased to have got to the finish after our recent run of bad luck although it’s a bit disappointing that we couldn’t challenge for the win after our early problems. I’d like to thank Co-ordSport, Nicky Grist and Songasport for their support.”

After their successful Woodpecker outing Burton and Rogerson are planning to contest the Cambrian rally in North Wales in October. For more information on Shelley’s rallying please visit www.shelleyrally.com.
Posted by GS at 22:13

Grove Hill Garage and Kumho Tyres-backed Wright and co-driver Michael Wilkinson made a good start on the opening two tests of the rally near Ludlow, taking fourth place overall. The event then moved to Radnor forest and Wright emerged from the 18 miles of gravel tracks in third place.

“I was happy to be in third after Radnor. We had some problems with the flatshift gearbox in the opening stages which lost us some time and then a few more seconds were lost when we had a slight excursion off the road in stage two” said Wright.

The rally returned to near Ludlow for the remaining three stages. Wright maintained his third position until the final stage when a charging Andrew Burton pipped him for the position.

“I enjoyed the last three stages, we pushed as hard as we could but we couldn’t keep Burton behind us. I am pleased with the result and it’s down to the last round for the title although we’re now suffering with the dropped scores system. We’ll be making some more improvements to the car in time for the next event and we’ll be trying hard to get the win.”

The final round of the BTRDA championship takes place in October with the Cambrian rally in North Wales.
Posted by GS at 22:11

Images from the Woodpecker Stages 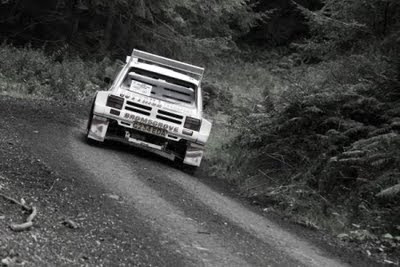 CLICK TO SEE THE EVENT GALLERY
Posted by GS at 15:44