A selection of images from Britpart BXCC round 1 which was held at Walters in South Wales. 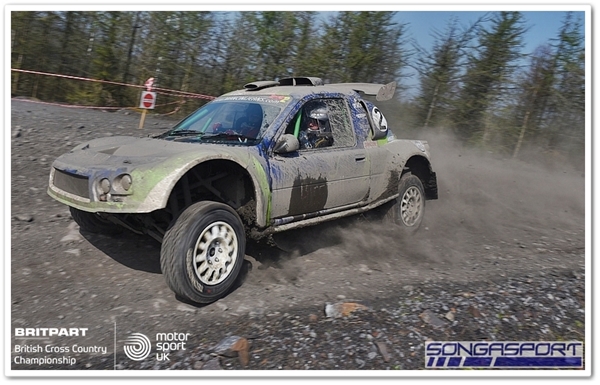 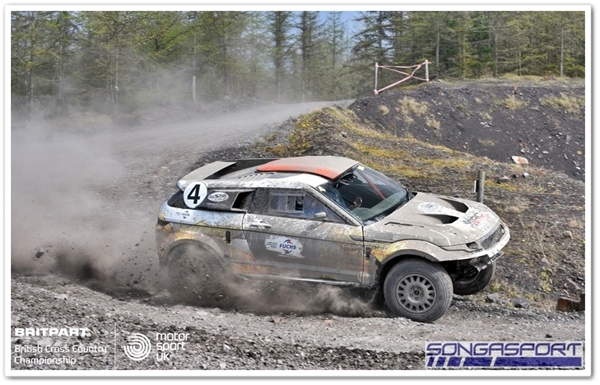 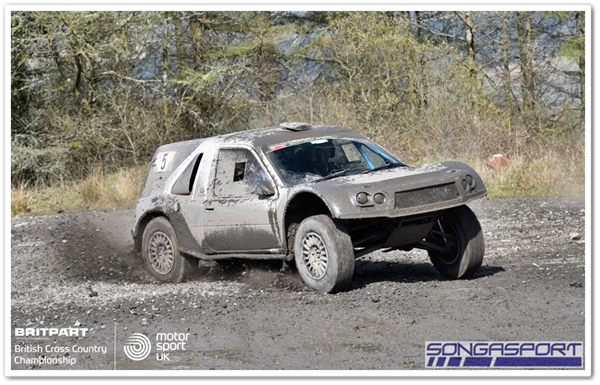 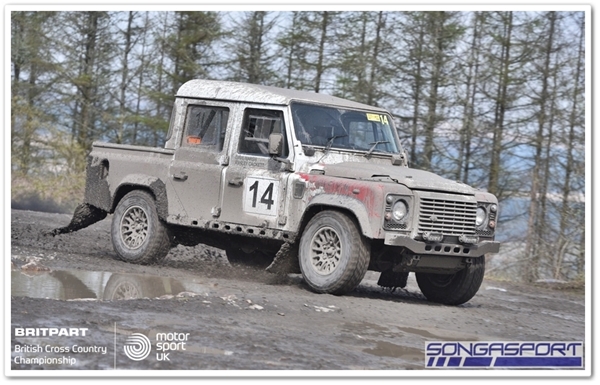 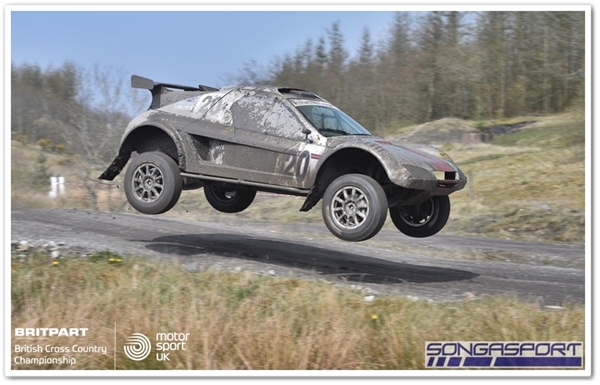 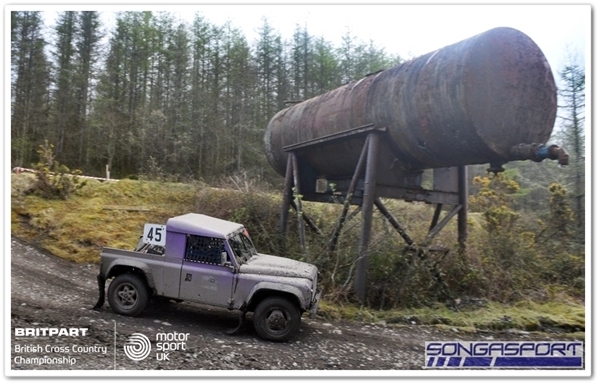 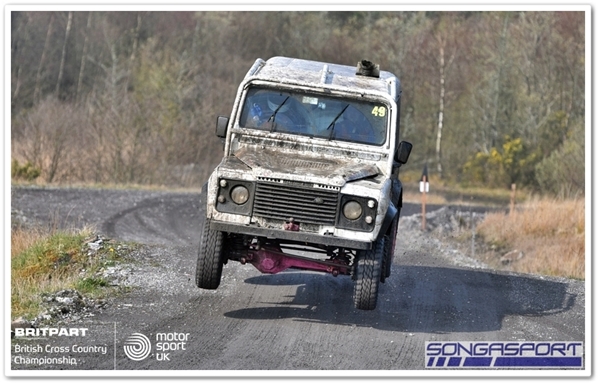 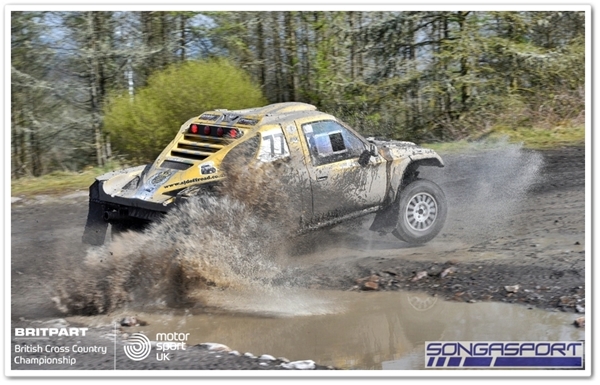 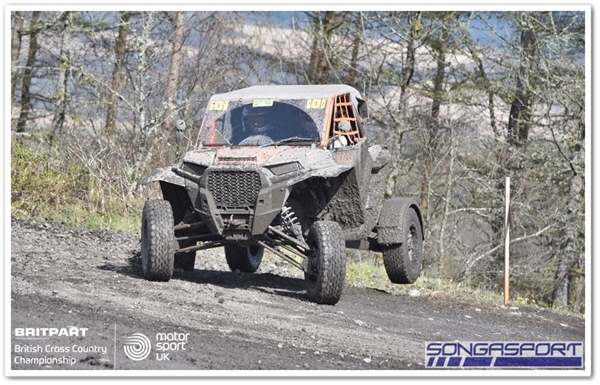 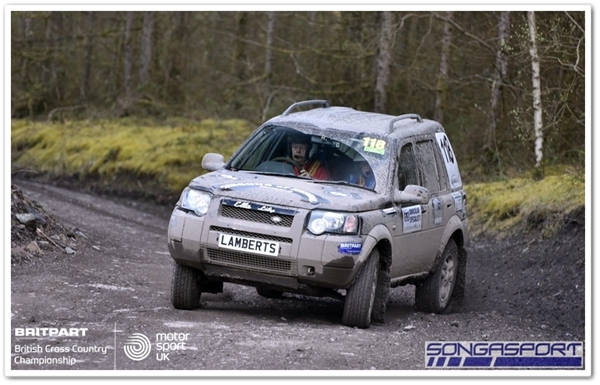 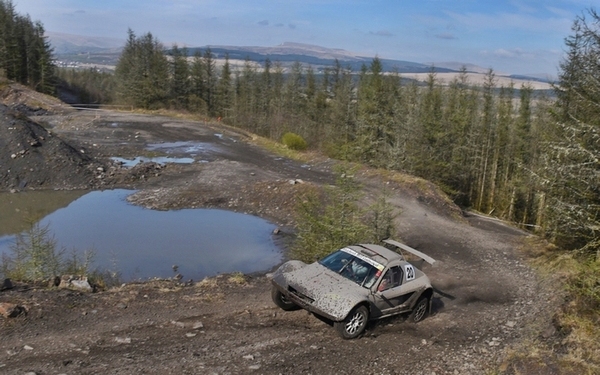 The Britpart British Cross Country Championship (BXCC) returned in style last weekend with the opening round at Walters won by Adrian Marfell and Paul Bartleman in their Fouquet-Nissan.

The organisers laid on a very tough course of almost nine miles in length and, after rain most of Friday, it was very slippery as the crews headed out on the opening run.

Justin Birchall and Jonny Koonja set the early pace in their Lofthouse Freelander, they were the only crew to break the 14 minute barrier on the first run. Marfell took the lead after run three as Birchall’s car had electrical issues which resulted in a time around two minutes slower than his first two runs. Mark Jacques and Adam Nicholson held third place after the opening three runs with Andy Degiulio and Paul Foley in fourth in their Milner R5 despite a first run puncture which removed part of the bodywork.

The initial runs proved troublesome for several crews. Jason Rowlands stopped with a broken drivebelt on his Can-Am X3, Ryan Cooke’s Milner LRM-1 had water pump issues and Mike Wilson broke a driveshaft on his Freelander.

With his car restored to full health Birchall was quickest on the remaining three runs of the opening day, reducing Marfell’s lead to 22 seconds. Degiulio was third overnight ahead of Jacques with Richard Wynne-Williams and Matthew Lowe making it three Lofthouse cars in the top five.

The competitors continued to keep Rabbit Recovery busy with a variety of mechanical issues and accidents including Oisin Riley rolling his Polaris and Mike Moran losing an argument with a tree in his Lofthouse Evo.

The crews did another five runs on day two and it was Birchall who was again quickest on the first run of the day, bringing the lead down to 11 seconds. His hopes of victory were dashed on the second run though as a puncture cost around 30 seconds.

Marfell had three punctures during the event but four fastest times on the last four runs helped give him a winning margin of over a minute from Birchall.

“It was a very enjoyable course to drive, the second half was very fast and flowing.” said Marfell. “We had a few problems with punctures, it’s a venue where you need a little bit of luck I think. The event was very well organised and it’s great to see the British championship back on the map, thanks to the That’s Motorsport team for all their hard work.”

Birchall commented: “It’s a good start to the season, we had a great battle with Adrian and hats off to him for the win. We had a couple of electrical problems on the first day but we managed to pull things back on the later runs. We’d hoped to push hard for the win early on day two but the puncture put paid to that. The course was very challenging, a real offroad event, it’s been a fantastic weekend.”

Jacques was promoted to third after Degiulio crashed on run nine but this was only after some late night servicing.

“We were checking the car over after the first day and found a problem with the diff,” said Jacques. “Thanks to Ian Gregg, who lent us his welding gear, we were able to get it sorted after working on it all of Saturday evening. I’m happy with third, we were pushing hard and our run times kept dropping until the last couple of laps when the car had some sort of issue – we’re not sure exactly what yet!”.
A final run puncture dropped Wynne-Williams to fifth so it was Andy Powell and Mason Kershaw who finished fourth in their Caze Peugeot 306.

Richard Keasey took his Rakeway Ridgeway, resplendent in its new eye catching livery, to sixth. With engine problems on their GSR 206, Martin and Aston Cox purchased a Can-Am X3 for the event and, partnered by Josh Thomas, they finished seventh.

In eighth were Phil Ibbotson and Karina James in their BMW M3-engined Metro 6R4, Ibbotson finding that he’s quicker now that he can see where he’s going with his new glasses.

“It’s been a really good event,” commented Ibbotson. “It was a tough course but we had no problems and no punctures, we’ve had a fun weekend.”

Steve Smith and John Griffiths were ninth in their Clio V8 and rounding off the top 10 was Ryan Cooke and Darren Cooke who battled to the finish after several issues with their car.

Outside of the top ten Paul Rowlands finished 11th despite rolling his Polaris in front of the TV cameraman and suffering a broken balljoint.

Chloe Jones travelled straight from competing in the Abu Dhabi Desert Challenge to race at the slightly less desert-like Walters Arena and she was rewarded with a class win and 14th overall.

Mike Wilson drove his Freelander in his usual committed manner to finish 20th overall and first in class, his service area resembling a Freelander scrap yard with assorted pieces of broken suspension and transmission.

The championship will resume in June in South West Scotland. For more information please visit crosscountryuk.org. For pictures from the event please visit www.facebook.com/songasportoffroad. Video coverage from the event will be available on www.youtube.com/specialstage. 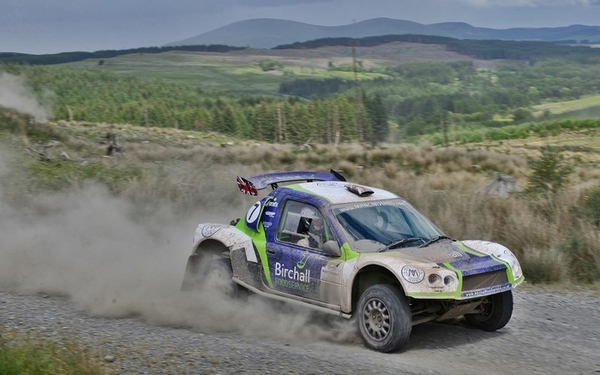 The Britpart British Cross Country Championship returns next weekend when the opening round of the season takes place at Walters Arena in South Wales.

The championship, organised by That’s Motorsport Ltd, features six rounds spread across the UK from Bovington on the South coast to Forrest Estate in South West Scotland.

A strong entry has been attracted with a good mix of championship regulars and new competitors.

Justin Birchall will lead the crews away in his Birchall Food Service and Mancini Jeans-supported Lofthouse Freelander. Numerous tweaks have been made to the car over the winter and the Lofthouse Motorsport team were recently at TEG Sport mapping the engine ahead of a pre-Walters test session. Birchall is one of four drivers in Lofthouse cars with Mark Jacques, Mike Moran and Richard Wynne-Williams bringing their LS3, Evo 9 and BMW-engined examples respectively.

Returning to the championship after a few years competing elsewhere is Martin Cox who will be sharing his car with son Aston. They enjoyed a successful season last year winning the NORC championship.

2016 BCC Trophy champion Phill Bayliss of OFG Land Rover Specialists is another driver returning to the championship. Bayliss commented “We’re looking forward to racing in the BXCC this year, it looks like it will be a good season with events at venues like Sweet Lamb and Walters.”

Phil Ibbotson will contest his first full season as a driver since 2013 in his Metro 6R4 Evo. Ibbotson navigated for Andy Powell in 2014 and 2015 and then entered a couple of British rounds as a Clubman in 2016 and 2017. Karina James, who previously competed with Paul Harris, will navigate for Ibbotson.

Chloe Jones will make her British championship debut at Walters alongside navigator Tom Gray. Jones is combining her BXCC driving with navigating in Baja events. “We’ll be using the same car that we raced in the Hill Rally championship last year,” said Jones. “We’re really excited about competing in the British championship for the first time.”

After mixed fortunes in his first British season in 2017 Andy Degiulio is hoping for more luck this year in his Milner R5. “We had a few reliability problems last time we raced in the championship so  I’m aiming for a more successful season this year. I’m looking forward to racing in Scotland as I’ve never been to that venue. As well as the BXCC we’ve been invited to the Goodwood Festival of Speed again so it should be a busy and exciting year.”

The event will start at 10am on Saturday and the crews will have a full day of competition. The action continues on Sunday and the event is expected to finish at around 3pm. For more information on the championship please visit crosscountryuk.org.
Posted by GS at 20:25