The Motor Sports Association’s campaign to bring closed road motor sport to mainland Britain received a major boost yesterday. In an announcement that was welcomed by former F1 champions Sir Jackie Stewart and Nigel Mansell OBE, the coalition government confirmed that it would begin a three month public consultation to establish how existing legislation can be amended to allow motor sport to take place on public roads.

The announcement was made during a debate at Westminster Hall, secured by Ben Wallace MP (Wyre and Preston North) and involving Mike Penning, the Parliamentary Under-Secretary of State for Transport. Both Members of Parliament were unanimous in their belief that the MSA’s proposal could significantly boost not just UK motor sport and the related motor sport industry, but also bring benefits, both economic and social, to the communities that wish to host this type of event.

The MSA has been pushing successive governments to empower local authorities with the right to suspend the Road Traffic Act without having to resort to an Act of Parliament. Such an amendment would open up the way for competitive motor sport events such as stage rallies, sprints and hillclimbs to take place on a limited number of British roads, as happens across most of mainland Europe.

Colin Hilton, MSA Chief Executive:
“We are delighted that the government has recognised that a minor change to the Road Traffic Act could have huge benefits, not only for the sport itself, but also for the communities involved and we are grateful to the Under-Secretary of State for Transport for listening to our proposals with such an open mind. As the governing body, we are proud of our excellent track record of safety and risk management, and throughout the consultation process we will be demonstrating that proper safeguards are already in place to ensure that these events would be safely and responsibly staged.”

Three-time F1 world champion, Sir Jackie Stewart said:
“I whole-heartedly support the initiative to introduce the opportunity for motor sport to utilise appropriate public roads for sporting events. The British motor sport industry is one of the UK’s most successful enterprises and we indeed lead the world in this field. There are many other countries that use their roads on a temporary basis for significant sporting events that attract worldwide interest. In many cases it can even progress safety standards on those same roads for the benefit of the general public and all road users.”

Former F1 world champion Nigel Mansell OBE has also given his backing to the proposals:
“This would be a great move forward for the sport in the UK and would bring visitors and pride to parts of the country that wish to stage such events. I am delighted that this government seems to be willing to embrace motor sport which will assist the UK’s world-leading position, and improve the sport’s ability to help provide opportunities and focus for young people.”

In announcing the consultation, Mr Penning said that he wanted to “establish how we can deregulate the matter from central Government bureaucratic control, while ensuring that local communities do not have such things imposed on them. Those involved can perhaps come together in a consortium with the MSA, which will issue the licence for any motor sport activity. We are in a very exciting situation.”
Posted by GS at 18:06

The KC Rally Team will make their debut next week on the Bulldog Challenge event in Wales, the opening round of the BRC Challenge championship

Driver Becky Kirvan from Burton Pidsea will compete for the team which is supported by KC, provider of communications services to homes and businesses in Hull and East Yorkshire, as well as Kirvan’s existing supporters Princes Quay shopping centre, Bardahl Oils, Rally4Real, Songasport and Peart Auto Services.

After a successful 2010 which saw her win the BTRDA Ladies championship Kirvan will make the step up to the BRC Challenge in 2011 in a Ford Fiesta ST and she will be partnered by MSA English championship-winning co-driver Karen Watts to form the only all-female crew in the Challenge.

“I am delighted to receive support from KC which will allow me to compete in the BRC Challenge,” said Kirvan. “It’s going to be a really exciting year as all the rallies will be new to me and I’ll be competing on famous events such as the Jim Clark rally and Rally Isle of Man.”

“There will be a lot of learning to do, especially on the events which take place on tarmac as all my recent experience is on forest events, but I am confident that we will do well and get plenty of exposure for the KC brand and my other supporters.”

Mark Conway, KC’s Director of Business Services, said: “We’re delighted to be supporting Becky as she embarks on the next stage of her rallying career. Her performance last year in winning the BTRDA Ladies championship was inspiring, and we’re sure that this year she’ll make her mark on the BRC Challenge championship too.”

The BRC Challenge season kicks off with the Bulldog event on April 2nd before taking in rounds in Cumbria, Berwickshire, Ulster, Yorkshire and the Isle of Man. The Bulldog is based in Welshpool and it will include stages in Penllyn and Dyfi forests as well as the highly popular Woodyard spectator stage.

“I can’t wait to get to the start line”, commented Kirvan. “I competed in one of the forests used on the Bulldog on another event last year although I think it will be totally different in my new car. We’ll be aiming to get a good finish and a decent haul of points to kick-off our championship.”

Please visit http://www.beckykirvan.co.uk/ for all the latest team news and details of the team newsletter, Facebook page and Twitter feed.
Posted by GS at 18:30

After a successful BRC debut event in the Rallye Sunseeker Cristofaro presently lies fifth in the Formula 2 championship standings and he is keen to build on that in the Welshpool-based Bulldog event which he will contest with co-driver Rob Fagg. The pairing will use Cristofaro’s TEG Sport-run Ford Fiesta ST with support from Pirelli, Genpower UK, Autoglym, Millers Oils and Nicky Grist.

“We had a good run on the Sunseeker and it’s great to have a decent championship position in my first BRC season,” said Cristofaro.

“I’ve had a bit of a break since my last event in early March so I’m raring to go and I’m aiming to be pushing right from the start.”

“The event uses some very well known stages such as Dyfi forest but I’ve never competed on them so it will be a new experience for me. We recce the stages on the day before the rally and I will be making my own pacenotes for the first time which is another step on my learning curve this year.”

The rally has a ceremonial start on Friday evening in Welshpool town centre with the competition taking place over 85 miles of tough forest stages on Saturday.

Please visit http://www.nickcristofaro.co.uk/ for more information on Cristofaro’s rallying.
Posted by GS at 18:28

Images from the Mid-Wales Stages 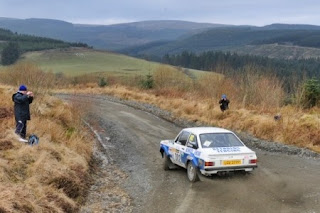 To see the event gallery please click here.
Posted by GS at 20:43

Images from the Malcolm Wilson Rally 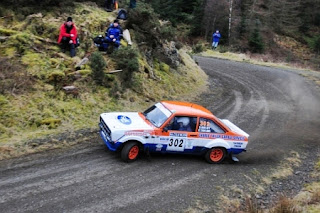 To see the event gallery please click here.
Posted by GS at 18:53

Nick Cristofaro continued his 2011 rally programme last weekend on the Malcolm Wilson rally in Cumbria, round two of the BTRDA championship. Despite being unwell both in the run up to the event and on the event itself he battled through to take an encouraging fourth in class.

"Our times were ok on the first three stages but we suffered from a lack of grip," said Cristofaro.

"We’re running on a very tight budget so to save money we used tyres from our last event rather than the usual new ones, I think our times would have been much better on fresh rubber."

The next two stages were in the notoriously tricky Grizedale forest and Cristofaro maintained his fifth in class although he was hampered by brake problems.

Two stages in Greystoke and Wythop completed the rally and Cristofaro moved up to fourth as the crews headed to the rally finish in Cockermouth town centre.

"We lost more time in Grizedale with the brake troubles and unfortunately with just my dad servicing for me there was no time to replace both front calipers so we went in to the last two stages with uneven braking which caused problems when slowing for the corners."

"I’m happy to get to the finish though and fourth in class is quite a good result considering the car problems and my illness."

After three events in less than a month Cristofaro now has a short break from rally action until he resumes his British Rally Championship challenge in April on the Bulldog rally.

Please visit http://www.nickcristofaro.co.uk/ for further information.
Posted by GS at 23:17

Bentham’s David Wright suffered a disappointing retirement on last weekend’s Malcolm Wilson rally, round two of the BTRDA rally championship, when a stone holed the oil filter on his GPM Mitsubishi Evo 9 forcing him out of the event.

Wright and co-driver Michael Wilkinson started the Cockermouth-based rally with fifth fastest time on the opening Comb test, a tough stage that used the gravel tracks in Whinlatter forest. Despite a time-consuming stall in the third stage in Greystoke forest Wright maintained his fifth place as the crews headed towards the first service halt.

“We had mixed fortunes on the opening three stages,” said Wright. “I didn’t feel that the Comb stage went too well although we set a fairly competitive time. Stage two in Hobcarton was better but then near the end of Greystoke the engine cut out at a hairpin bend and we lost a few seconds getting the car started.”

The rally moved south for two stages in Grizedale forest. After his time loss in Greystoke Wright was keen to move up the leaderboard in his Proflex, Drenth, Kumho Tyres and Grove Hill Garage-supported car and he stormed through the Grizedale North test an amazing 11 seconds faster than the eventual event winner.

Now only 25 seconds off the lead Wright continued his charge in Grizedale South but it all came to nothing when a stone flew into the engine compartment and holed the oil filter.

“I was delighted with our time on the first Grizedale stage, it put us in a good position to try and push for a win and we were going well in Grizedale South too but sadly the holed oil filter meant our rally was over.”

“It’s very disappointing as we were on for a good result but I’m heartened that we set a fastest time so it shows we have the pace to challenge for victories.”

Wright will next be in action on the Somerset Stages in April.
Posted by GS at 20:12