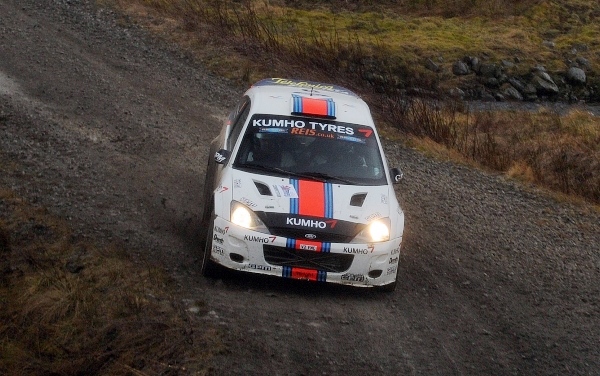 Bentham's David Wright was denied a win on round 2 of the BTRDA rally championship, the Malcolm Wilson rally, last weekend after mechanical issues on the final stage of the event lost him time.
Despite suffering from a lack of brakes for part of the opening Comb stage Wright and co-driver Steve Pugh were third fastest in their Grove Hill Garage and Kumho Tyres-supported Ford Focus WRC.
The next stage was Wythop which featured a very long straight where Wright had the Focus on the rev-limiter in 6th gear. His bravery was rewarded with a fastest time which took him into the lead of the event.
There was one more stage before the service halt and Wright set another fastest time which gave him a lead of six seconds over Charlie Payne.
After a short stage in Thornsgill there were two stages in Grizedale forest, a venue where Wright usually goes very well. It was all going to plan until the Focus hit a large puddle of water which caused the windscreen to instantly steam up. The crew were forced to slow to walking pace for 10 seconds as visibility was zero. The time loss meant that Payne and Wright were exactly equal on time after the first Grizedale stage.
A storming drive in the second Grizedale stage saw Wright pull out a lead of 14 seconds and, although Payne pulled back a second on the next stage, it looked like Wright was set for the win.
Disaster struck on the final Greystoke stage though as a driveshaft broke on the start line. With drive going to three wheels rather than four the handling of the Focus became very difficult which led to a spin at a tight hairpin. At least 30 seconds was lost and Wright dropped to second overall as a result.
"We had a great run and I was really getting used to the car and enjoying the performance," said Wright. "Despite one or two issues we were setting some very fast times and with a lead of 13 seconds going into Greystoke the win should've been ours."
"However, the shaft issue made the car extremely hard to control, we were lucky to get away with only one spin. Sadly we dropped too much time so had to settle for second. It's still an excellent result but I was gutted to have the win snatched from us."
"I'm hoping to get some funding together to do more BTRDA rounds this year. Thanks to GPM, Grove Hill Garage, Kumho Tyres, Proflex and Drenth for their help and support."
Posted by GS at 21:10 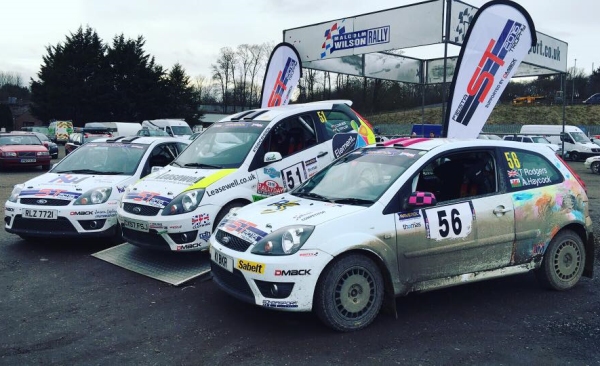 Burton upon Stather’s Tim Kirvan-Rodgers enjoyed a successful Malcolm Wilson rally last weekend when he finished third in class and third in the Fiesta ST Trophy championship.
The rally started from Ford’s M-Sport World Rally Team base near Cockermouth in Cumbria and the crews faced 8 tough stages in the Lake District forests. Kirvan-Rodgers and new co-driver Abi Haycock made a good start on the opening Comb stage in their Nightingale Nursing Recruitment Agency Ltd-supported Ford Fiesta ST, which featured a new livery painted by Kirvan-Rodgers’ two children. They set fourth fastest time in the class, a position that was maintained over the following Wythop and Greystoke stages.
“The first three stages were ok but we had a few issues with the car,” said Kirvan-Rodgers. “The brakes weren’t performing as well as they should and the handling of the car felt strange. We tried making some suspension adjustments and tyre pressure tweaks at the service halt after Greystoke to improve matters."
A short stage in Thornsgill was next before two tests in the notoriously tough Grizedale forest. With the car handling slightly better Kirvan-Rodgers moved up to third in class after the first Grizedale test, a position he maintained until the event finish.
“We still had issues with the handling of the car in the later stages so we couldn’t push as hard as we liked although it was better than the early stages. I’m pretty happy to have finished third in the circumstances. We’ll have to strip down the car now and see if we can find what caused the issues.”
“I enjoyed the event, the Malcolm Wilson rally always provides a really challenging route including some of the real classic stages. Abi did a great job on her first event with me, we're planning on contesting the next round of the Fiesta championship in Somerset next month and hopefully some further rounds if we can secure some additional support."
Please visit www.facebook.com/timrodgersrallying for further pictures from the event.
Posted by GS at 19:58 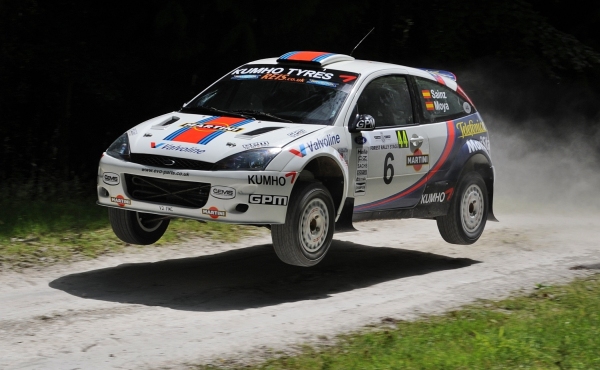 Bentham’s David Wright will contest his first rallies since last November’s Grizedale Stages over the next couple of weekends when he takes part in events in Cumbria and Shropshire.

First up will be the Malcolm Wilson rally next weekend, a round of the BTRDA championship and an event that Wright has scored some good results on in recent years. He’ll be using an ex-Carlos Sainz Ford Focus WRC prepared by Giles Philips Motorsport and supported by Grove Hill Garage and Kumho Tyres. It is the same car he used to take second place on the Grizedale Stages and he also used the car to wow the crowds at the Goodwood Festival of Speed.

“I’m really looking forward to getting back in the car after a few months break,” said Wright. “We had a great run on the Grizedale Stages and came within a second of winning the event, a result which gave me a lot more confidence in the car. We've made a few more handling tweaks to improve the set-up since then.”

“The Malcolm Wilson rally also uses Grizedale forest so hopefully we’ll go well again. We’ll also be tackling stages in Whinlatter and Greystoke forests so it’s sure to be a tough event, especially as the weather often throws all sorts of conditions at the drivers.”

“The event has attracted a very good quality entry including some more modern WRC and R5+ cars so getting a podium finish will be a huge challenge but that’s what we’re aiming for.”

Wright will switch from a four wheel drive Ford to a two wheel drive one for the following weekend's AGBO Stages in Weston Park near Telford where he’ll drive an Escort Mk2.

“It’ll be quite a change going from driving a four wheel drive car on gravel to a two wheel drive car on tarmac but it should be great fun! We did the event last year in the Mk2 and spent most of the time sliding sideways! Since then we've fitted a 2.5 Smith and Jones engine and a Drenth sequential box so we should be quicker and even more sideways this year."

"Steve Pugh will be my co-driver on both events. He has many years of experience which is vital for getting a good result. Thanks to GPM, Grove Hill Garage, Kumho Tyres, Proflex and Drenth for their help and support."
Posted by GS at 19:58 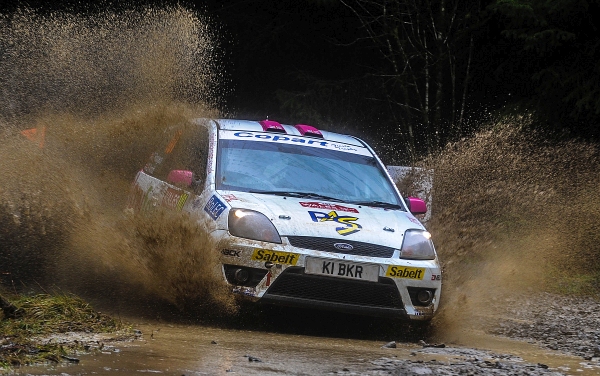 Burton upon Stather's Tim Kirvan-Rodgers will start his 2016 rally season on March 12th when he contests the Malcolm Wilson rally in Cumbria.
Kirvan-Rodgers' last event was the world championship level Wales Rally GB and he took his Ford Fiesta ST to a successful finish, winning the Copart Fiesta Trophy. Following the success of the Trophy event, a full Fiesta ST Trophy championship has been formed for 2016 and the Malcolm Wilson rally is one of the rounds.
Joining Kirvan-Rodgers on the event will be co-driver Abi Haycock. Haycock, from Tredegar, is in her third season of rallying and she has competed in a wide range of events.

"I'm looking forward to competing again," said Kirvan-Rodgers. "It's been a few months since Rally GB and I'm ready to get back out on the stages."
"I enjoyed competing against the other Fiestas in the Trophy on Rally GB so I'm hoping to get the budget together to contest a few rounds of the new ST championship. We've managed to secure support from Nightingales Nursing Recruitment Agency Ltd which has allowed us to put an entry in for the Malcolm Wilson event, we'll see how things go from there."

"It will be my first event with Abi. She's only been competing for two years but she has already done several stage rallies as well as road, targa and endurance events so I am confident she'll do a good job."

"The Malcolm Wilson rally uses some of the classic stages in the Lake District such as Comb and Grizedale. It is always a tough event with the weather usually playing a major part in the results. There will be a few Fiesta STs competing so it'll be interesting to compare our times - hopefully we can get a good result."

The rally starts in the morning of 12th March and the crews will face around 45 miles of competition in the Cumbrian forests. Updates from the event will be posted on www.facebook.com/timrodgersrallying.
Posted by GS at 18:48