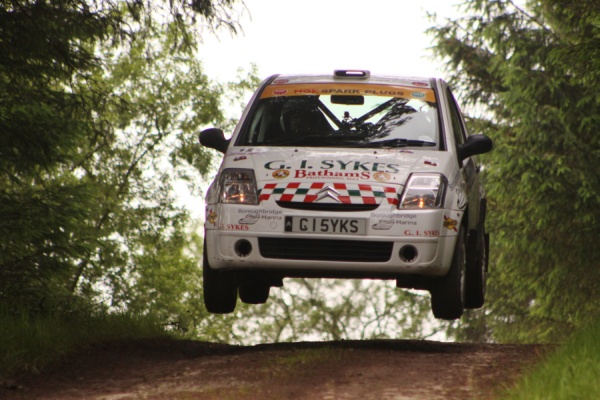 Stourbridge rally driver Richard Sykes will head to Ulster next weekend for the next two rounds of the BRC Challenge championship knowing that back to back wins are vital to keep in the title race.
After winning the BRC Challenge crown last year Sykes has suffered mixed fortunes in 2013 with problems on each of the three events he has contested in his Bathams Brewery, G I Sykes Ltd, Silverstone Tyres and Boroughbridge Marina-supported Citroën C2 R2 Max.
He goes into the Ulster double-header in third place in the championship so two maximum scores are needed ahead of the final two rounds in September and October.
“It’s been a frustrating season for me so far,” said Sykes. “We’ve been on the pace but circumstances have conspired against us. We had a misfire on the Pirelli which cost us a win, we were leading on the Jim Clark before going off and not being able to battle back due to a lot of stages being cancelled and on the Scottish we were set for a second place finish when a puncture dropped us down the leaderboard.”
“We’ve been fortunate that the championship rewards good class finishes so despite the disappointing overall results we’ve still managed to score enough points to see us in third place in the title race."
“I only have one goal for Ulster and that is to win both events. I did it last year and I won the double event on the Isle of Man in 2007 too so it can be done. With two forest rounds to go after Ulster we need the wins to have a chance of the title. We’d still be relying on the results of others but I can’t control that.”
“We recently found a problem with the car which caused the misfire on the Pirelli and it must have affected me all year so far. A blanking grub screw had fallen out of the back of the inlet plenum in a place that could not be seen. We found it by accident. This has been costing me around 15 horsepower as well as causing the niggle of a misfire.”
“We are going to Ulster feeling very optimistic and ready for a big push to get the two wins on our preferred surface of the tight twisty tarmac lanes of Enniskillen.”
The rally takes place on 23/24 August with a separate BRC Challenge event on each day.
Image courtesy Tom Murphy
Posted by GS at 18:57

Images from the Speyside Stages 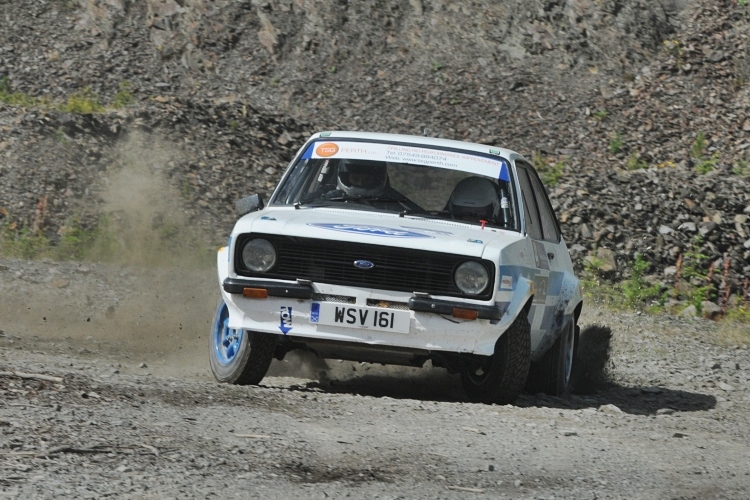 Please click here to see the images.
Posted by GS at 20:20 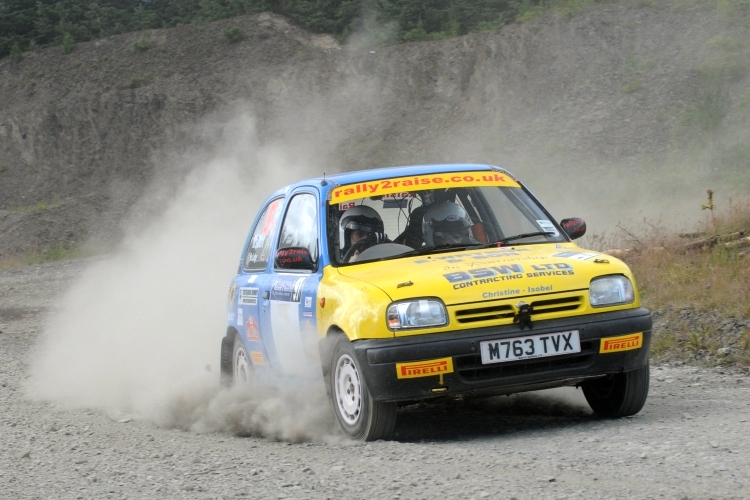 Severe gearbox problems and an off could not prevent the Rally2Raise team of Rachel Clark and Caroline Lodge from finishing the Speyside Stages rally last weekend.


The drama started almost immediately for the team in stage 1, Teindland.  Their E.Watson and Son, Pirelli, AW Motorsport and McPherson Document Solutions-supported Nissan Micra 1300 hit a rut which bent the sumpguard and forced it into the gear linkage resulting in the loss of fifth and reverse gears and a third gear which was extremely difficult to engage.


The car was nursed through the next two stages before a service halt at Huntly where the Clark Motorsport crew of Barry and Archie set about repairing it sufficiently for it to continue in the rally.


“The rally did not get off to a good start for us,” said Rachel. “We hit the rut with a fair bit of force. With the gear linkage damaged I didn’t think we’d make it through the next two stages before service but we did and the service crew did a great job to allow us to continue.”


The crew completed stage 4, Gartly, with no further problems and headed to stages 5 and 6, two stages which shared the same start line but which split after a few miles. The girls’ rally almost came to an end in stage 6 as the Micra slid off the road into a ditch. Fortunately some spectators were on hand to push the car back onto the road.


After another service halt the rally was completed with three more stages. These were successfully negotiated and the team headed to the event finish in Elgin city centre.


“The Gartly stage was absolutely fantastic, it’s my new favourite stage. Stage 5 was ok but we were very lucky that there were some spectators nearby in stage 6 otherwise we would not have got out of the ditch, huge thanks to them for helping us.”


“I was very happy to get to the finish. It was a tough event for us, the dust and heat made the inside of the car like the Sahara at some points. It’s disappointing that the gearbox problems meant we couldn’t go as quickly as we’d have liked but we made it to the end when many crews didn’t and we were 65th which isn’t too bad from a start position of 97. Thanks to Caroline for a superb job on the notes, thanks to Barry and Archie for servicing, thanks to the 63 Car Club for a brilliant event and thanks to all our sponsors for their support. ”


The team are hoping to contest the Merrick Stages in September as their next event. Please visit www.rally2raise.co.uk or www.facebook.com/rally2raise for more information about the Rally2Raise project which is supporting the Nystagmus Network and Bottle Stop in 2013.
Posted by GS at 18:50