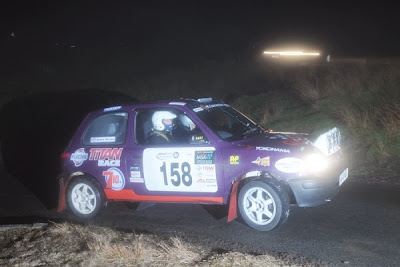 Rochdale rally driver Steve Brown rounded off his season with a fine performance on the Pokerstars rally on the Isle of Man last month. He finished 16th overall and first in class in his 1300cc Nissan Micra.


From a start position of 30 Brown made good progress on the opening day of the event to lie in 25th overall and 4th in class at the overnight halt. A storming performance in the Mintex Racing, Fuchs Titan Race, 710 Oil's, PIAA, Sabelt UK and Six 80 Ltd Aviation Asset Management-backed Micra on day two saw him take the class win as well as moving up to 16th on the overall leaderboard.


“After a strong run on the Rally Isle of Man in September I decided to return to the island for the Pokerstars,” said Brown. “It’s a fantastic place for rallying, the stages are a great challenge and to come away with a class win rounded off the season perfectly.”


“We’ve had a mixed year as far as the MSA Tarmac championship goes but we had two good results on the Tour of Epynt and the Jim Clark National so I’m happy with that. The two non-championship Isle of Man events went very well and I’m delighted with the results we achieved on them.”


“It has been a good learning year and hopefully we can put the experience to good use next season. Thank you to all my sponsors for their support.”


Brown will have a new Micra ready for 2014 but he has yet to finalise his plans for competing.


“I think I’ll be doing a few of the Tarmac championship rounds in the new car but the first few events will be used to develop the car.”


“I will be keeping the existing Micra too and that will be rebuilt over the winter. If the budget allows I hope to return to the Isle of Man with it to try and further improve my times there.”


Please visit www.facebook.com/stevebrownrallying for more information.
Posted by GS at 20:20