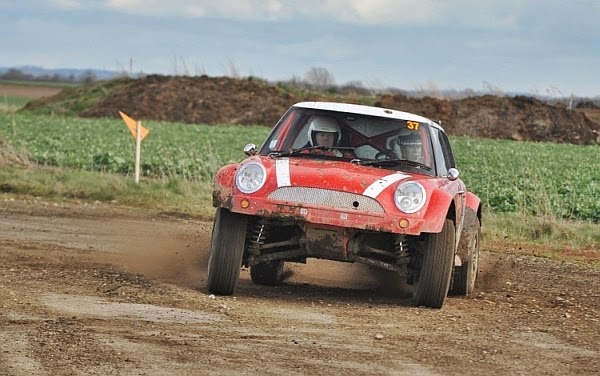 Please click here to see the images.
Posted by GS at 21:07 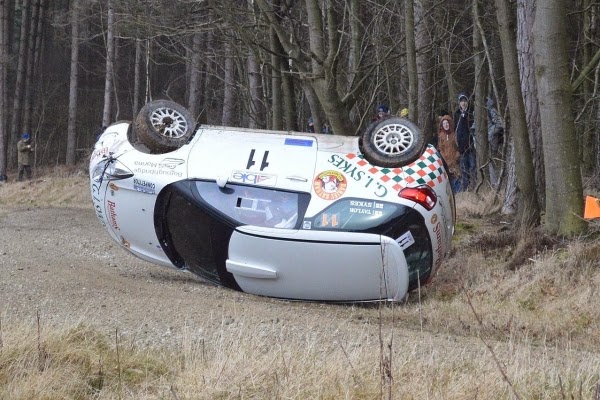 Since his last event in February Sykes has done further testing in his new Bathams Brewery, Boroughbridge Marina, G I Sykes and Body Clinic-supported Citroën DS3 as he attempts to get to grips with the many changes from his previous car.

“We went to the Sweet Lamb venue in Wales for a days testing,” said Sykes. “Callum Black, who has a lot of experience of driving the DS3 in the British Rally Championship, came with us and gave me some great advice so thanks to him for that.”

“By coincidence Callum will be starting right in front of us on Rally North Wales and there are some other DS3s out too so it will be interesting to see how our pace compares.”

“I’m privileged to get an entry on the event. The rally was a round of the British Rally Championship in 2013 and 2014 but on both occasions it was cancelled which was very disappointing. We won the BRC Challenge last time it ran in 2012. We will be rallying on some of the classic Welsh forest stages which are also used on the UK’s World Rally Championship round.”

“With Simon Taylor on wedding duties Emma Morrison, who sat with me last year, will be in the co-driver’s seat. I’m really looking forward to gaining some miles in the new car. It’s been the most difficult car to drive that I’ve ever had but once you’ve mastered it they sing. I just need to get used to it and get more miles under my belt. This will be the last event we do before the championship starts so we need to make the most of it. I've certainly got more experience of the car than I had on the last rally we did so hopefully I can keep all the wheels on the ground this time!”


The rally is based in Dolgellau and the crews will battle over 40 miles of stages in Dyfi and Gartheiniog forests. 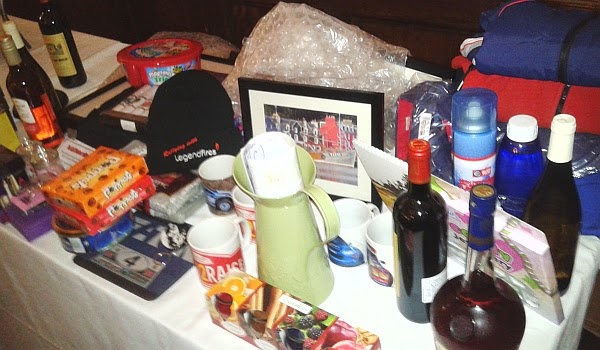 Thanks to everyone who bought a Rally2Raise raffle ticket at the recent Saltire Classic rally. We raised a fantastic £290 which has been paid into our Just Giving account and will go to the Nystagmus Network.

Thanks also to Diane for helping us run the raffle and to everyone who donated a prize including Motorsport Mugs, John Stone from Legend Fires, John Clark from Belmont Communications and Colin Wallace.

Please visit www.rally2raise.co.uk for more information on the project.
Posted by GS at 13:51

Regulations available for the BCCC 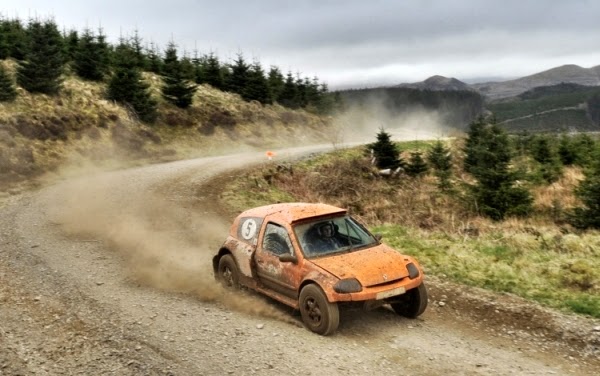 The entry fee for the season is £1,800 and the regulations can be downloaded from www.marches4x4.com.

Regulations are also available for the Britpart Freelander Challenge which will take place over the same six events.
Posted by GS at 09:55

Images from the Malcolm Wilson rally 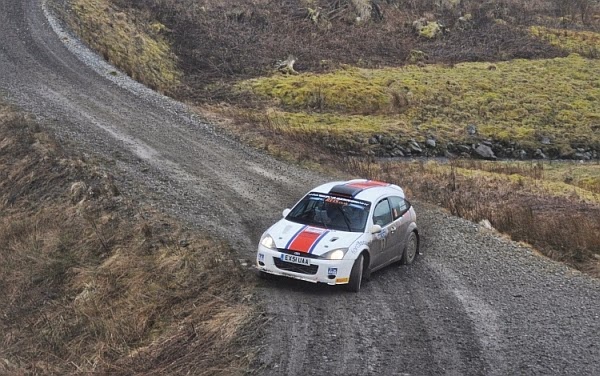 Wright battles to the finish on Malcolm Wilson rally 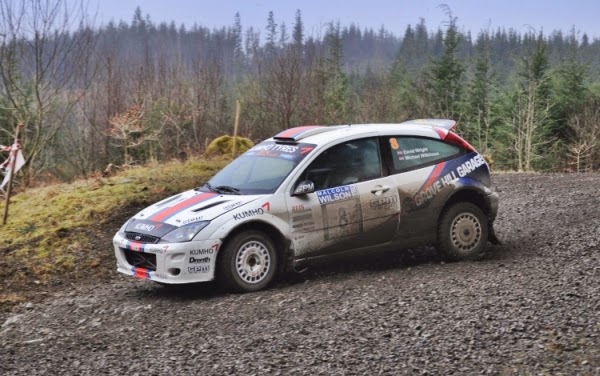 Bentham’s David Wright made it to the finish of last weekend’s Malcolm Wilson rally in Cumbria after a tough two days with his Ford Focus WRC.

Wright tested the Kumho Tyres and Grove Hill Garage-supported Focus on the Thursday before the rally and had no problems as he gained valuable mileage in the new car. However, when he drove the car to scrutineering at M-Sport’s premises on Friday the engine cut out. Wright was able to make it to scrutineering after resetting all the cars systems  but it was looking doubtful that he’d be able to start the event.

With the help of M-Sport staff Wright was able to diagnose the problem as a faulty chassis ECU. Fortunately a replacement was sourced which returned the car to full health.

The event itself started with two stages in the forests near Keswick followed by two more near Penrith. Wright and co-driver Michael Wilkinson made a good start, including setting second fastest time on stage three, to lie in 6th place at the first service halt.

“After all the drama on Friday I was relieved just to make the start of the first stage,” said Wright. “The car performed perfectly at the test session so it was very frustrating to have a problem on the way to M-Sport. We were lucky to be able to call on the expertise of M-Sport’s staff, who originally built the car, to identify the issue.”

“With our aim being to finish the event we started off cautiously and took no risks. The first few stages were very slippery and we found that the replacement ECU had settings for tarmac events rather than gravel which made handling the car very difficult. I was happy to be in 6th going into service.”

Two stages in Grizedale forest followed and it was here that Wright’s hopes of a good result were ended. The Focus clipped a large stone which damaged the wheel rim and caused a puncture. Wright was forced to stop and change the wheel which cost him five minutes and dropped him right down the leaderboard. A troublefree run through the last two stages saw Wright finish in 22nd place.

“The puncture was disappointing, we had moved up to fourth after the first Grizedale stage and were hoping to push for a top three position. It wasn't to be though. We achieved our target of finishing the event which is the main thing. We’ve got a very steep learning curve with the new car but we made a lot of progress at the weekend which bodes well for the rest of the season.  Thanks to Giles Philips Motorsport for preparing the car and thanks to Kumho Tyres and Grove Hill Garage for their support.”

Wright’s next event with the Focus is scheduled to be the Somerset Stages in April but he’ll also be out on the AGBO Stages on 22nd March where he’ll drive a Mk2 Escort co-driven by Steve Pugh.
Posted by GS at 19:45 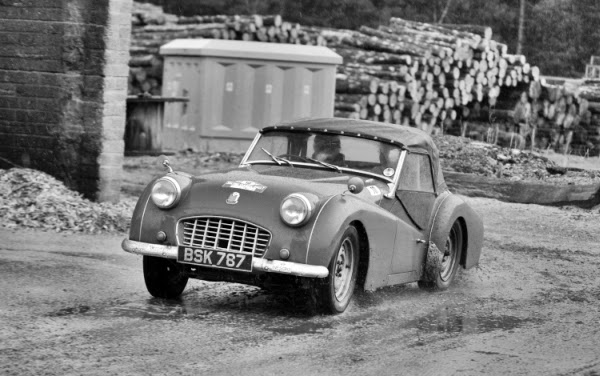 Please click here to see the images.
Posted by GS at 19:16 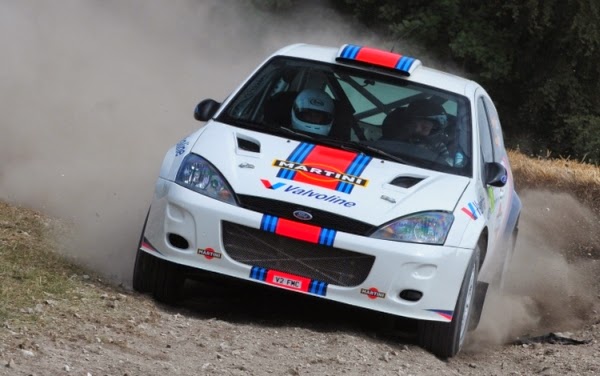 After a break of a year Bentham-based rally driver David Wright will make his return to rallying on next weekend’s Malcolm Wilson rally, a round of the BTRDA championship.

Wright will drive a GPM-prepared Ford Focus WRC which was originally driven by Carlos Sainz in the World Rally Championship. The car will be supported by Kumho Tyres and Grove Hill Garage.

It will be Wright’s first competitive event since last year’s Malcolm Wilson rally although he debuted the Focus at the Goodwood Festival of Speed.

“Unfortunately work commitments meant rallying had to take a back seat in 2014,” said Wright. “We did a few runs at Goodwood with the Focus last June but we’ve not had time to do any testing since then so it will be a pretty steep learning curve at the weekend. The car is a big step up in performance from our previous Mitsubishi Evo 9 and there are a lot of different settings to get to grips with.”

“Our aim for the event is to get plenty of mileage in the car so we’ll be driving for a finish but I’m sure my co-driver Michael Wilkinson will be pushing us on! The rally uses some of my favourite stages and it’s one I have had some good results on in the past so hopefully we will get our season off to a good start.”

Wright is planning on contesting further BTRDA championship rounds this year and he has also received an invitation to bring the Focus, in its works Martini colour scheme, to the Goodwood Festival of Speed again. 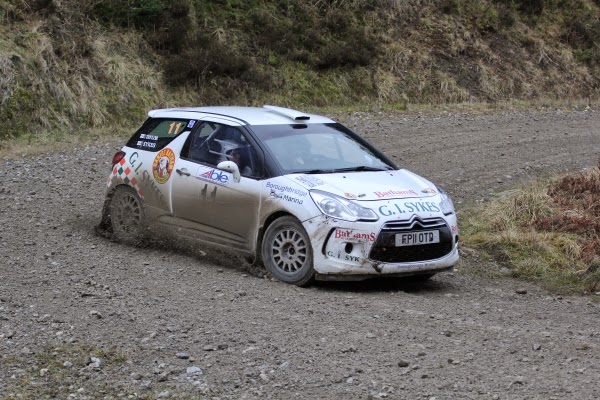 Stourbridge rally driver Richard Sykes endured a tough debut event for his new Citroën DS3 on the Riponian rally but he battled through several setbacks to take a class win.

The 2012 British Rally Championship Challenge champion entered the Thirsk-based event to get some valuable mileage in the G I Sykes Ltd, Boroughbridge Marina, Bathams Brewery and Body Clinic-supported DS3 ahead of his planned BTRDA Mixed Surface title campaign.

Sykes rally got off to a bad start as the car left the road and landed in a ditch just three corners into the first stage. Things did not improve on stage two as another excursion left the car on its side, both incidents costing Sykes valuable time and dropping him down the leaderboard. A time penalty for arriving too early at a stage compounded the disappointing start.

“Due to our lack of knowledge of the car the set-up was all wrong and I couldn’t keep it in a straight line making it very difficult to drive, the conditions were very wet and slippery so it was not ideal for learning a new car,” said Sykes.  “We escaped from the two offs with relatively minor damage but we lost a lot of time. My co-driver Simon Taylor was also very rusty after not competing for 18 months off and we gained a three minute penalty with a timing error on top of the time lost in the offs which meant we were second from last after three stages, not the start I had hoped for.”

Sykes battled on and steadily climbed the leaderboard over the remaining stages, including setting one equal fastest stage time and regular top six overall times. Their persistence was rewarded with a class win, secured on the final stage by just three seconds.

“The day got better after our poor start. We had some problems with the car stalling on the start line as I tried using the very complicated launch control and I was finding it hard to build confidence but we were getting quicker on the later stages. I was delighted to share the fastest overall stage time on one stage, especially against four wheel drive world championship car opposition, and to win the class despite our troubles is very pleasing. There’s definitely a lot more to come from the new car and I’m looking forward to seeing what it can do.”

“It’s still two months until the Mixed Surface championship starts so I’m looking to do a days testing to learn some set up and another event before then, probably Rally North Wales in March. Thanks to all my sponsors for their support.”