Images from the Goodwood Festival of Speed 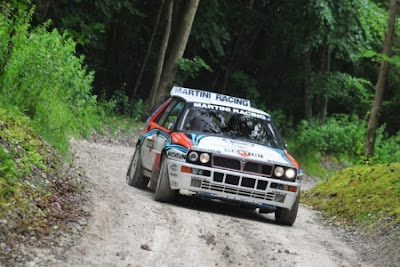 Please click here to see the images.
Posted by GS at 19:50

Kev Monaghan has received a boost to his 2012 rally season with the news that Stauff UK will be supporting his Pirtek Vauxhall Corsa in the REIS MSA Tarmac Championship.

The Sheffield-based company has serviced the UK hydraulic industry for 35 years offering hydraulic pipework, components and accessories. In addition to a state-of-the-art distribution and manufacturing facility in Sheffield Stauff have regional branches in Aberdeen, Southampton and County Antrim.

John Morris MD of Stauff UK said: “ Supporting Kevin in the rally car helps to strengthen our working relationship and gives Stauff an opportunity to build its brand, we wish him every success.”

Monaghan added: “It is fantastic to have a sponsor who recognises what our rally car can achieve for them with the television coverage of the REIS championship and the PR support we have. We will be investing in new Dunlop tyres which should see our times improve and give us that competitive edge.”

Monaghan’s Corsa is presently at Playskool Motorsport having some work done on the paddle shift to improve the gear change times. The next event for the team will be the Tyneside Stages at the Otterburn military ranges on 12th August.

Wright teams up with Millers Oils ahead of Goodwood weekend

Bentham-based rally driver David Wright has secured a new sponsor for his 2012 rally season ahead of driving his Mitsubishi Evo 9 at the prestigious Goodwood Festival of Speed next weekend.

Millers Oils, one of the leading independent blenders of oil and fuel additives, are joining Wright’s existing supporters Kumho Tyres, Proflex, Drenth, York Brewery, GPM and Grove Hill Garage as he aims to build on his recent excellent results which have included a win on the Tour of Hamsterley and second place on the Plains rally.

The first event for the new partnership will see Wright in action on the rally stage of the festival, which takes place at Goodwood House in Sussex. Joining Wright on the rally stage will be several rallying legends such as Hannu Mikkola, Russell Brookes and Jimmy McRae. Also attending the event will be Formula One stars such as Lewis Hamilton and world champion Sebastian Vettel.

“I am delighted that Millers Oils will be supporting us”, said Wright. “I am sure it will be a great partnership and it is fantastic that our first event will be something with the profile that the Festival of Speed has.”

“It is an honour to be invited to drive at the festival, especially alongside some of the most well known names in motorsport. I shall be doing my very best to put on a good show for the thousands of spectators and, of course, my sponsors.”

The festival starts on Friday 29th June and runs until Sunday 1st July. Wright will be in action on all three days.
Posted by GS at 19:15 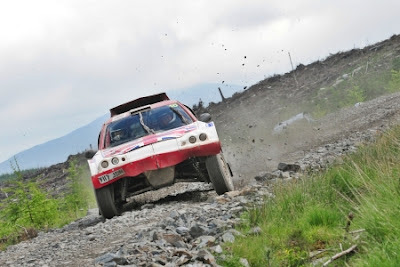 Please click here to see the images.
Posted by GS at 19:46

Richard Sykes, from Stourbridge, continued his quest for the BRC Challenge rally title last weekend when he finished in second place and first in class on the Jim Clark Challenge event.

The event was due to start on Friday evening but due to delays experienced by the other rallies running ahead of the Challenge the opening stage was cancelled, with the 16-mile Abbey St Bathans test now kicking things off on Saturday morning.

Sykes was quickly on the pace in his Bathams Brewery, G I Sykes Ltd, Boroughbridge Marina and Silverstone Tyres-supported Citroën C2 R2 Max, catching and passing Richard Archer in the car in front after 7 miles of the stage. However, he then picked up a puncture which cost a lot of time and meant he was only fifth fastest. It could have been worse though as the puncture damaged the wing and bumper with the wheel arch liner catching fire. Fortunately the fire was put out with one of the fire extinguishers at the finish control.

Sykes and co-driver Simon Taylor were able to change the tyre before the next stage but with the car running slicks on the front and intermediates on the rear and only wet weather tyres as spares the handling was all over the place.

“With the changeable weather we wanted to cover the possibility of rain with our choice of spare,” said Sykes. “Getting the puncture meant we had to put one of the intermediates on the front and a wet weather tyre on the back, running three different compounds certainly made the handling interesting!”

Despite his tyre woes Sykes pushed hard and set some excellent times, including fastest time on the Fogo stage, a time which would’ve put him in the top five had he been contesting the International rally that was running at the same time. By mid-event service he was up to second-place on the leaderboard, 25 seconds behind the rally leader.

Another run of the long Abbey St Bathans stage was next and, with the tight and twisty stage suiting Sykes’ car, he flew through the lanes 22 seconds quicker than anyone, pulling the gap to first back to three seconds.

Two super-fast stages remained. On the first of these Sykes made a small error and dropped to 14 seconds off the lead. With championship points being vital he decided to settle for second place rather than risk an accident in the last stage.

“Second overall and first in class is a great result and it puts me in second place in the championship battle. It’s a little disappointing that our second run of the Abbey stage showed that the puncture cost us around 48 seconds so it looks like without it we would’ve won. Our aim for the rally was to get a good haul of points though so we’ve definitely achieved that.”

Sykes will continue his BRC Challenge season with the Ulster Challenge rally in August.

The rally started on Friday evening with two short stages around Duns town centre. As he braked for the first corner Monaghan realised that he had chosen the wrong tyres for his Pirtek-backed Vauxhall Corsa Kit Car. With no opportunity to change the tyres between the stages Monaghan drove cautiously to make sure the car was in one piece for the full day of competition that was to follow on Saturday.

Day two started with the longest stage of the rally, the 16 mile Abbey St Bathans and, despite having changed to new medium compound tyres on the front wheels the car was still moving around a lot. With three stages to go before service Monaghan could do nothing about the tyres so drove with the need to get a good haul of championship points foremost in his mind.

Once he reached service some changes were made to the suspension settings and a soft compound tyre was fitted to the front wheels.

Another loop of four stages concluded the event. The car was now handling well and Monaghan was looking forward to enjoying the rest of the rally. Sadly his problematic event continued though as the display on the paddleshift gearbox stopped working meaning that he had to revert to conventional gear-changing for the last three stages.

Despite the problems Monaghan reached the finish of the event with a MSA Asphalt Championship class win as well as 25th overall.

“ I’m delighted with the result after the troubles we had,” said Monaghan. “I was determined to get to the finish so to get a championship class win is a good bonus.”

“I really didn’t think it was our day when the paddleshift display broke pretty much as soon as we’d got the car’s handling sorted but the result makes up for the problems. If anyone has some tyres they want me to try please get in touch!”

“Thanks to Pirtek Tyne and Wear, F and R Belbin, GB Lubricants and Playskool Motorsport for their support, Steve Dargan for a good job on the pacenotes and Neil Thompson and Garry Salmon for servicing.”