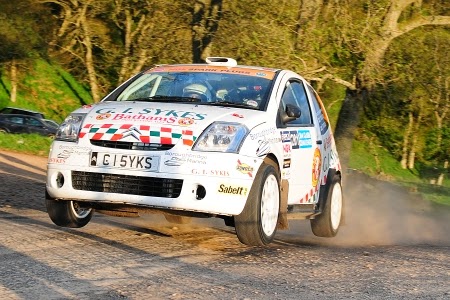 Stourbridge rally driver Richard Sykes is aiming to build his lead in the British Rally Championship (BRC) Challenge title race next weekend on the Jim Clark rally after taking victory on the opening round, the Pirelli rally in Cumbria.
Sykes has never won the BRC Challenge on the Jim Clark although he has finished second three times and third once. He was leading the event last year until he lost a lot of time following an accident.


Since the first round further work has been undertaken on the Bathams Brewery and G.I.Sykes Ltd-supported Citroën C2 R2 Max to improve the new engine that was fitted at the start of the season.
“The new engine performed well on the Pirelli but it wasn’t quite right so we’ve done some more development work on it ahead of the Jim Clark,” said Sykes. “ It often rains on the event so we’re thinking of setting the car up for wet conditions. Simon Hawthorne has done his usual excellent job of preparing the car.”


“A win would be great next weekend but the first priority is to get a good finish and a decent haul of championship points. We led the event last year but were caught out on a downhill corner and the car went through a hedge into a field and there weren’t enough stage miles left to fight back into a good position.”
“The stages on the Jim Clark are on closed public roads and they include Abbey St Bathans which is my favourite rally stage – it has 16 miles of twisty tarmac with plenty of places to catch crews out, it’s a real challenge to get right.”


“Emma Morrison will once again be in the co-driver’s seat and we’ll also have Martyn Billing’s expertise on the event which will give us a great chance.”
The event starts on Friday evening and it continues on Saturday with the crews tacking over 110 miles of high-speed competitive stages. 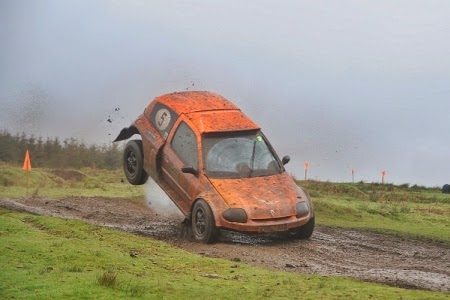 Please click here to see the photographs. Prints and electronic images are available from the BCCC official photographer, songasport@gmail.com.
Posted by GS at 20:14 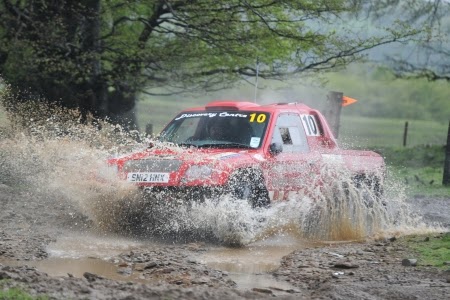 Andrew West and Peter Widdop battled tough weather conditions to take victory in round two of the Britpart British Cross Country Championship.The event was held near Ebbw Vale on a hilltop farmland course made up of tracks and moorland. West was quickest on the first run of the event in his Discovery Centre-backed Milner R5, three seconds ahead of round one winner Martin Cox with Martin Gould lying in third place in his V8 Clio.


West continued to head the leaderboard throughout the opening day and he built up an overnight lead of 1m 39s over Cox. With Gould blowing a diff on the Clio it was Paul Garner who held third place going into day two.
The top three maintained their positions on day two with West extending his lead by a further 10 seconds.


“I’m very pleased with the result,” said West. “It’s been a real battle in the wind and the rain and it’s good to take the win. We had to change a wheel bearing overnight but other than that we had no problems. We’re up to second in the championship now so we’ll be pushing hard for another win at the next round.”
Cox took second despite his brakes failing on the last two runs, the result meaning that he keeps the lead in the championship race.


“Second is a great result in the circumstances,” commented Cox. “After a problem-free round one we had a few issues this weekend, wrong tyres for the first three runs, leaking power steering fluid and brakes which starting going three runs from the end and then totally failed on the last two runs. The weather was atrocious and I’m indebted to my service crew and all the marshals who stood out in it.”
Garner claimed his first podium position of the season in his GSR V10. He commented: “I’m happy with third, we were running on part-worn tyres so we struggled for grip in the wet conditions. We also had a rear shaft break which lost us time. We’re working our way up the leaderboard though so that’s good.”


Paul Myers managed to get his car repaired in time following it’s round one inversion and he was rewarded with fourth place. Ryan Cooke fought back from electrical problems on the opening run to take fifth place in his Milner LRM-1.
In sixth was Andy Powell. There was some doubt as to whether Powell would make the event as the new diff he needed for his Simmbugghini wasn’t delivered as planned. However, it finally appeared at 2.30pm on Friday and he got it fitted in time.


Paul Harris was 7th in the Bristol Street Motors-supported GSR Maxilight, a good result after his round one retirement. Mark Jacques claimed 8th in his new 3M Challenger despite a broken trackrod end on day two.
The Isuzu UK D-Max of Jason Sharpe was in 9th, the team having to borrow a CV joint from their service vehicle to keep the car going. Ian Bartlett rounded off the top ten in his Tomcat Tornado.


Alan Thomas won the Trophy category in his Warrior Gemini while in the Freelander Challenger Ben Gott triumphed in the Dynamic Metals-supported Race2Recovery car.
The BCCC moves to Scotland for the next round with the crews heading to the Forrest Estate course in Dumfries and Galloway. 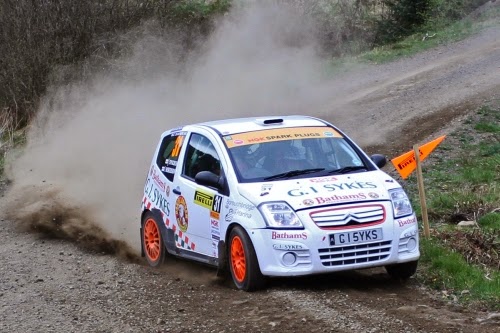 Stourbridge rally driver Richard Sykes made a winning start to his BRC Challenge championship campaign with a dominant victory on the opening round, the Pirelli rally.
Sykes got his rally off to a flying start, setting a time nearly 15 seconds faster than his nearest rival on the opening stage, with the new engine in his Bathams Brewery and G.I.Sykes-supported Citroen C2 performing brilliantly. Sykes time was so quick that he would’ve been 4th overall in the main British Rally Championship event that ran alongside the Challenge, only being beaten by three more powerful turbo cars.


The pace was maintained over the other five stages on the event, Sykes and co-driver Emma Morrison powering to the fastest time on all but one of them to win by over a minute.
“We had a great rally and gave the new engine a really good test,” said Sykes. “We’ve struggled to get the engine right and we were still making adjustments on a rolling road the day before the event. There’s still more to come, I think it’s around 85% right at the moment.”


“Emma and I worked like clockwork and had a really good safe run. We pride ourselves on being quick out of the box and it was great to be so much quicker than our rivals on the first stage as well as being on the pace of the top British Rally Championship crews. I didn’t get sucked in to trying to beat those guys though and concentrated on keeping the lead in my own event.”
“The stages in Kielder were as good as ever, especially on the second run. We saw 109mph on one of the straights which is always exciting on gravel!”


“It was brilliant to drive the car with a different engine. The characteristics have changed and it was like a new car. I soon got used to the extra torque though and it really suited the gravel roads.”
“The team worked for hours and hours to prepare and finish the car for the Pirelli so big thans to them, I hope the win is payback for the massive effort everyone has put in.”


Next up for Sykes is the Jim Clark rally which is held on closed public roads around Duns in the Scottish Borders and the team are working hard to set the car up for tarmac and make more progress with the new engine.
Image courtesy Frank Love raceandrally.co.uk
Posted by GS at 20:18

BCCC battle heads to Ebbw Vale for round 2 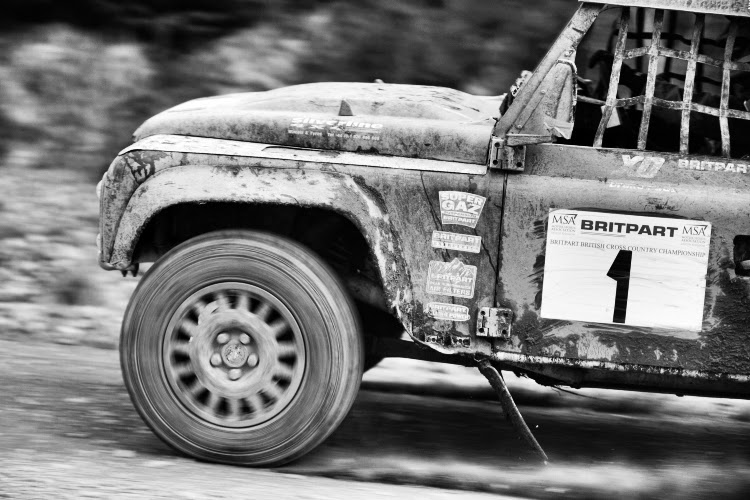 Crews in the Britpart MSA British Cross Country Championship (BCCC) will head to Hafod-Y-Dafal near Ebbw Vale next weekend for the second round of this year’s series. The site is a new one for the BCCC and the course is expected to be around six miles of moorland tracks.

Martin Cox heads the championship table on 86 points after taking his first BCCC win in the opening round at Pikes Peak. Unlike his main rivals, Cox had a trouble-free event and he’s hoping for another good run at Hafod-Y-Dafal.
Cox commented: “The car is all ready to go, there was nothing needed fixing after Pikes Peak, all we’ve done is give it a good clean. Bring on the next round!”

Paul Myers finished in second place in round one and has 81 points. Myers faces a race against time to be ready for round two. He rolled his car over the flying finish line and a post-event inspection revealed that more damage had been sustained than initially thought.

Andrew West is in third place on 75 points, a better result than he was expecting after suffering serious cooling issues at Pikes Peak with his Milner R5, including a burst header tank.

Crews hoping for better fortunes at round two include Andy Powell who had a troublesome opening day at round one which included breaking a shaft on one run and a loose brake pipe on another. Powell will once again have Phil Ibbotson in the navigator’s seat. Paul Harris will return in his GSR Maxilight following a head gasket failure.

“We’ve removed the engine and put another in,” said Harris. “Hopefully we can get a good result at round two, I’m looking forward to racing at a new venue.”

Ian Bartlett was another driver who retired at Pikes Peak. His Tomcat has had the damaged oil pipe fixed that caused the retirement and work has been done to try and prevent the problem occurring again. Bartlett is also busy getting his usual 3M 206 ready for a return to competition.

In the Trophy category Alan Thomas is looking for another win in his Warrior Gemini while in the Freelander Challenge the Race2Recovery team presently lead the class ahead of championship newcomer Ian Linford.

The event will start at 10am on Saturday morning with a full day of action. Day two will start at 9am with the finish scheduled for early afternoon. Spectator information is available on www.marches4x4.com.
Posted by GS at 20:11