Team Deli do the RAC

Day 1 of the event… I headed to Duncombe Park near Helmsley for signing on and scrutineering. Went for a walk around the stage and saw plenty of historics on the course, including Pughie, Tyke and JP. Plenty of nice cars in the service area although some seemed to be already having problems.

I met up with the other Team Deli members Barney and Carol as well as Simon Clarke who, despite getting stuck in Langdale last year, was once again using his Royal Mail Skoda Yeti.

We all headed to Dalby for the evening’s two stages. Conditions were rather different to last year, dry and no snow!

We found a decent slight right into uphill 90 right for the first spot. We were quite near the end of the stage so we could hear the cars going up and down the long Dalby straights a long time before we saw them.

Bob Bean was the first to come into view, spotlights piercing the trees. He was followed by a few Saabs and the Lancia of Steve Graham.

Then it was time for the main field, most of the leading crews taking a neat line but some getting nice and sideways including Phil Collins in the Ascona.

A few cars had already been in the wars, car 1 (Stefaan Stouf) not even reaching where we were after going off the road.

With Simon staying at the same corner for the second run Team Deli had a short drive to another corner, a long straight into a hairpin right quickly followed by a left-hander.

Marcus Dodd came round with a reshaped roof on his Mk2 and Malcolm Mawdsley’s Impreza had a little go at scaring Barney by getting out of shape exiting the left-hander.

The stage finished and it was back along the track to see Simon who had decided to go to Gale Rigg for the next day’s stages, apparently worried about getting stuck again if he went with us to Langdale.

Team Deli headed along the forest drive and into Langdale, parking near the stage ready for day two’s action. Under the clear Yorkshire night sky Ballycastle-supported Carol had a quick drink or two before nodding off.

Glorious sunshine greeted the crews on day two. Barney and Carol stayed at the hairpin near where we’d parked while I wandered up to the double junction where a crowd of spectators provided a good backdrop for my photographs. There was plenty of good action with a lot of sidewaysness going on.

A quick break for a meal (Covent Garden veg soup, very nice) and then it was time for the second run for which I walked up to a fast left hander with a bit of a rut on the inside which kicked a few wheels in the air.

After the Yorkshire stages the rally carried on with tests at Croft, Hamsterley and, the last stage of the day, Shepherdshield. With Simon deciding to retire from the event again (tired) Team Deli headed up to Shepherdshield by themselves.

Barney had a sleep so Carol and myself went to watch at a quick left/right corner in the dark. Driving rain made spectating not as much fun as it had been earlier but it wasn’t too bad!

We left Shepherdshield and joined the military road towards Carlisle. The heavy rain made the road flooded in places which made for some good watersplash incidents.

By the time we got to Ae the Delica’s were cleaner than when we’d started the event. We went to park up at the same spot as last year, our journey interrupted slightly when we came across a Volvo estate stranded in the middle of the forest. Barney did his AA man duties and got it going again.

We got parked and had a natter for a while with Ballycastle-supported Carol having another drink.

Early morning in Ae and the trees were getting white – it was snowing! Barney and myself walked along the stage a bit to a series of corners.

The first car on the road was Bob Bean. He was also the first car off it as he slid wide at a corner just prior to where we were watching. A rope appeared and he was hauled back onto the road eventually.

Later on Dave Hemingway went off at the same spot after some blizzard conditions but despite 7 of us pulling the rope we couldn’t get him out of the ditch and he had to wait for the link car.

We stayed in Ae for the second run, Paul Griffiths ended his event going off the road just after where we were parked. "Media lady Carol” went to check he was ok which he was but his car was too far off to get back on. After last year’s monk incident we got out of Ae with no problems and it was straight off to Newcastleton. As we neared the stage the roads became very slippery but the forest itself wasn’t so bad. Two stages there ended our third day.

With day four being held in Kershope forest next door we didn’t have a very long drive on Sunday night. We went to park up in the quarry and found that “Davestaxi” and “Polo” were already there, along with two guys who were cooking some soup in a fire.

Ballycastle-supported Carol had a drink and Barney’s mobile disco played some Dire Straits as we gazed at the stars. There was a bit of frost on the ground but otherwise the tracks were clear.

A few hours later and it was all change! A load of snow had fallen overnight and the rally stage and the road leading to it had become treacherous. After a bit of a delay all the rally marshals and rescue crews were in position and the stage started.

Most of the rally cars tiptoed through the long course, desperate not to bin it on the final day. With the track cutting up and the public road likely to freeze again the last stage was cancelled.

And so we all headed out of Kershope, said our goodbyes and went home. As usual the RAC had been a highlight of the rallying year, once again we’d had a variety of weather conditions, great action, a good chat between stages and meetings with lots of like-minded folk.

Roll on next November when we’ll do it all again. 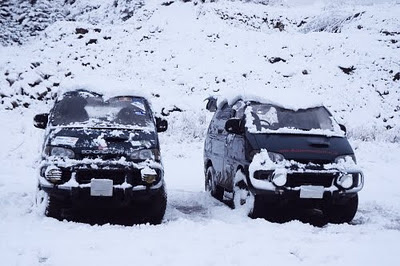 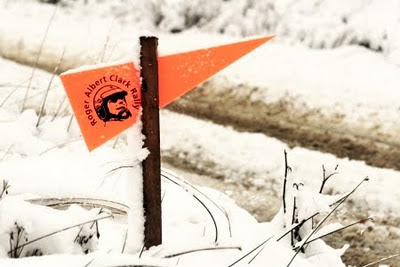 Please click here to view the images.
Posted by GS at 12:56