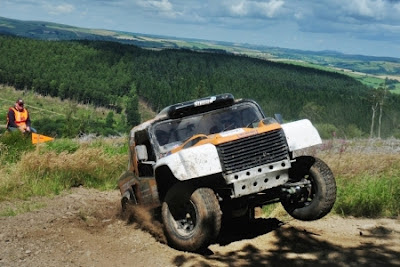 Please click here to see the images.
Posted by GS at 23:20

Rally2Raise crew Rachel Medich, from Aberdeen, and Katherine Begg, from Morecambe, will continue their charity funds and awareness raising venture next weekend when they attend the Speyside Stages rally in their Clark Motorsport and DMack tyres-supported Nissan Micra.

The girls will use the Micra on the very popular Cooper Park spectator stage in Elgin as well as selected gravel stages.

The Rally2Raise project has so far raised over £1,500 for the four charitable causes it is supporting: the Nystagmus Network, the Joanne Bingley Memorial Foundation, the MS Society and Cancer Research UK. A bucket collection will take place in Cooper Park to try and boost the total further.

“I am really looking forward to the Speyside,” said Rachel. “The Cooper Park stage is always packed with spectators so it is a great opportunity to raise awareness of Rally2Raise and our four causes. It is really good of the organisers to let us run on the event.”

“We tested the car recently on a forest track and that went really well so hopefully we can have a good run next weekend in the little Micra and also help our charities.”

As well as the Speyside the Rally2Raise team have confirmed attendance at the Merrick Stages and Saltire Rally Club Knockhill Speedfair in September.

For more information on Rally2Raise please visit www.rally2raise.co.uk.
Posted by GS at 19:20

Wright was hopeful of a good result on the Builth Wells-based event after recent successes and he lined up at the start line of the opening Monument stage in his Kumho Tyres, Proflex, Drenth, York Brewery, Millers Oils and Grove Hill Garage-backed GPM Mitsubishi Evo 9 aiming for a top three position. His hopes were dashed when five seconds before he was due to start the stage the engine revs surged and then the engine cut out. After 30 seconds the car was restarted but the stage was run with the engine in road mode rather than competition mode resulting in a large time loss.

With no chance to repair the problem and a risk of damage to the engine if he continued Wright retired once he had completed the stage.

“It is very disappointing to retire from the event, especially as the stages used are some of my favourite in the UK but there was nothing we could do unfortunately,” said Wright. “The problem occurred as we were being counted down to start the stage. We think it was caused by the alternator surging in power but we’ll check it all out in the next few days.”

“We’ve had a really good run of success recently and it’s unfortunate that we could not continue the run on Saturday. Thank you to all the sponsors for their support.”

Wright’s next event is likely to be the Merrick Stages in South West Scotland which takes place in early September.

Rally Isle of Man’s organisers have announced two new elements to enhance opportunities for competitors to tackle this September’s event.

The rally, a round of the Water End Properties Historic Asphalt Cup and the Eurocars Motorsport Manx Rally Championship, has received dispensation from the sports governing body, the MSA, to allow FIA Appendix K-eligible historic vehicles to tackle what is renowned as one of the biggest challenges in the sport.

The move widens opportunities for crews to enter vehicles beyond those made eligible by the UK’s regulations and dovetails with the events registration as a ‘National Event with Authorised Foreign Participation (NEAFP)’, allowing Rally Isle of Man to accept entries from non-UK and Irish license holders.

In addition, within the Duke Stages Rally element of the event, it is planned to introduce two new ‘period classes’. With the official Historic Rally regulations limited to cars up to 1981 the rally will run exploratory classes for cars from the 1980’s.

For the first time this provides competition classes specifically for this period, introducing cars such as the Vauxhall Nova and Astra’s, Peugeot 205, Ford Sierra, Toyota Celica, Mitsubishi Galant and Lancia Delta Intergrale, as well as many of the famed Group B machines that are able to meet today’s regulations.

“The organisers have said right from the outset that they intend to open up our classic event to as many competitors and competition cars as possible, and these announcements are part of that,” says Historic Rally Clerk of the Course Alan Teare.

“We have undertaken consultation, and competitors have very much driven this direction. It is a toe in the water with the 1980’s period classes, and it’s exciting to be at the forefront of the next natural progression. For many people, that was the golden era of rallying, and to have the sights and sounds back on the Manx stages is a wonderful opportunity.”

Regulations and entries are now available from the events website, www.rallyisleofman.co.im, and potential entrants under either of these clauses should contact the Rally Office in the first instance.
Posted by GS at 18:14

The rally organisers have today published the regulations for the three events that make up this year’s Rally Isle of Man.

Available for all competitors on the rally’s website www.rallyisleofman.co.im the regulations cover the three-day historic Isle of Man Rallee Classicagh, the Dukes Stages Rally, and the one day Isle of Man Trophy Rally.

The rally, a round of the Water End Properties Historic Asphalt Cup and the Eurocars Motorsport Manx Rally Championship, will take place over the traditional and classic stages made famous by this rally over the last 49 years. There is also the exciting addition of new stages and ‘concepts’ being introduced to spice up the event for regulars and newcomers alike.

The event is also open to competitors from Europe and Ireland as it is registered as a ‘National Event with Authorised Foreign Participation (NEAFP)’, allowing Rally Isle of Man to accept entries from non-UK and Irish license holders.

In addition, within the Duke Stages Rally element of the event, it is planned to introduce two new ‘period classes’. As Clerk of the Course Alan Teare put it, “there will be no classes for Historic cars in the Duke Stages, as these are catered for in the Rallee Classicagh, so we are taking the opportunity to run special classes for rally cars from the 1980’s.”

“It’s a period that has so far been neglected by the rally fraternity but contains such classic rally cars as the Opel Manta and Sierra Cosworth and even includes some of the awesome Group B cars which are still eligible for competition like the Metro 6R4, Renault Turbo, Lancia Integrale. If we can attract these cars out of their garages it would be a fantastic spectacle!”

Rally driver David Wright is aiming to continue his recent run of success next weekend when he contests the Nicky Grist Stages rally in Wales.

Wright, from Bentham, will use his Kumho Tyres, Proflex, Drenth, York Brewery, Millers Oils and Grove Hill Garage-backed GPM Mitsubishi Evo 9 on the event and after taking the fastest time on the rally stage of the Goodwood Festival of Speed at the end of June his hopes are high for another good performance.

“We had a bit of damage to repair on the car following Goodwood but that has all been sorted and we’re all ready for the Nicky Grist Stages,” said Wright.

“I’m full of confidence from both beating all the famous drivers at the festival and from our excellent results on recent rallies and I hope we can continue our form next weekend. I enjoy the stages that the event uses, they are some of the best in the UK – very fast and flowing with high levels of grip from the service.”

“There will be very tough competition with the world rally class cars as well as some really quick local crews so we will have to attack right from the start but I think we will be on the pace.”

The rally is a round of the BTRDA rally championship and it is based in Builth Wells with the stages taking place on gravel tracks around the Epynt military ranges.

Wright heads the pack at Goodwood Festival of Speed

Bentham’s David Wright enjoyed amazing success at last weekend’s Goodwood Festival of Speed when he beat numerous world championship drivers and cars to set the fastest time on each of the festival’s three days.

The event did not start well for Wright as he hit a bank in his Kumho Tyres, Proflex, Drenth, York Brewery, Millers Oils and Grove Hill Garage-backed GPM Mitsubishi Evo 9 when doing a run the day before the festival opened. The car suffered suspension damage which took most of Thursday to repair but the car was all ready to go on Friday.

Despite facing tough competition from the likes of the works Skoda team and the Citroën DS3 WRC of world rally driver Thierry Neuville Wright was quickest on the very slippery rally stage, pipping Intercontinental Rally Championship champion Andreas Mikkelsen by 0.4 seconds. He repeated the performance on Saturday before rounding off his event by taking another quickest time on Sunday, this time beating Neuville into second place.

“It was an unbelievable event, “ said Wright. “To beat some of the stars of world championship level rallying was fantastic. The stage was unlike anything I’ve driven on before, the chalky surface was almost like driving on ice.”

“Thanks to the team for getting Thurday’s damage repaired, they did a great job and without them I would not have been able to run the car in the event. Thanks also to the International Rally Drivers Club for inviting me to drive, I’m very proud to have been the quickest driver and hopefully I can return next year.”

Wright will return to action later this month on the Nicky Grist Stages in Wales.