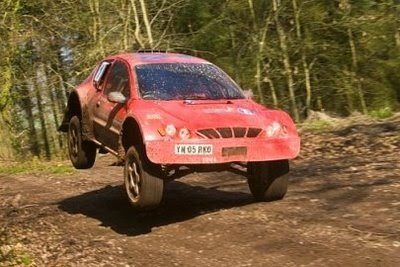 Reigning champion Richard Kershaw got his title defence off to a perfect start as he took victory in the opening round of the Britpart MSA British Cross Country Championship at a sun-drenched Glanusk Estate near Crickhowell.

The venue was a new one for the championship and a six mile course using the Estate’s gravel and dirt tracks proved to be testing for the competing crews with a mix of fast straights and tight tree-lined corners.

Huddersfield’s Kershaw led the event from run two onwards and finished up over two minutes ahead of nearest rival Chris Hammond.

"The first run was very slippy, it was a bit of a wake up call and it took a while to get back in the groove after a few months away from competing," Kershaw said. "We were lucky and had a trouble-free event with no breakdowns, several of the other guys at the top of the entry had a few problems which lost them time. It was a good event, very enjoyable, and the sunshine was glorious!"

Hammond was pleased with second overall after a consistently quick performance in his Milner R5.

"I thoroughly enjoyed the event, the course was very technical which made it challenging" he said. "It’s a very good start to the championship for me and I’m looking forward to the next round."

Dan Lofthouse led the event after the first run in the Lofthouse Proto LD4 but problems, including two punctures on one of the runs, dropped him back to fifth overall at the finish.

Tim Dilworth set several top three fastest times in his Peugeot but two stage maximums dropped him down the order as he experienced trouble with the fuel system including a dramatic fire at the finish of the course.

In the Trophy class Bob Seaman took victory in his Milner R4 with Kevin Groos winning the Clubman event.

The championship moves to Radnor in Powys for round two in May with a challenging forest course being planned.

Report and images by Songasport
Posted by GS at 11:31