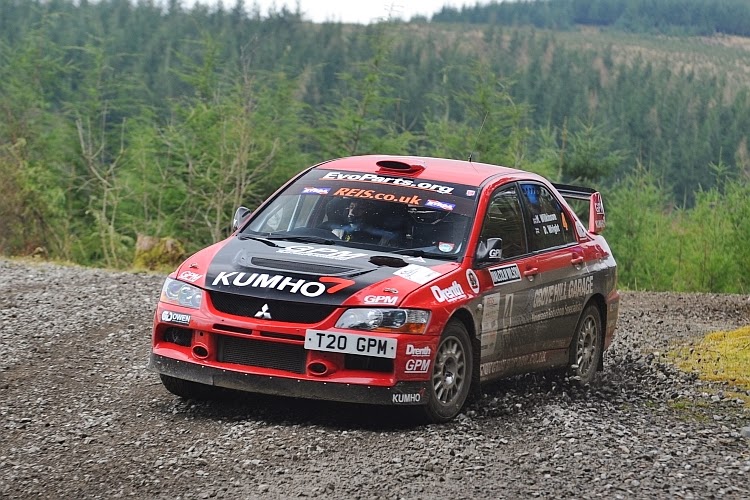 Bentham rally driver David Wright had a disappointing Malcolm Wilson rally last weekend when overheating problems forced him out of the event.
Wright’s rally got off to a bad start when just half a mile into the opening Comb stage the Kumho Tyres, Drenth, Owen Developments and Grove Hill Garage-supported GPM Mitsubishi Evo 9 started to overheat. The car went into “safe mode” and Wright had to struggle around the rest of the stage. Despite this he still set 12th fastest time.

There were three stages to go before service, two runs of Wythop and one of Greystoke. Although the car was not at 100% Wright managed to set two 6th fastest times and one 8th fastest.
The service halt was spent attempting to fix the cooling issues and Wright and co-driver Michael Wilkinson set off for three stages in Grizedale forest. However, on the road section Wright noticed that the engine had built up pressure so he decided to retire rather than risk further damage.
“After all the hard work by GPM to get the car ready for the event it’s really disappointing to have had to retire,” said Wright. “We had high hopes of getting a podium finish but they were dashed after around 30 seconds of stage one.”
“We carried on through the rest of the morning stages and had hoped we could get the car fixed in service but the pressure build up showed there was still a problem. It wasn’t worth the risk of causing a lot of damage so we pulled out on the road section to Grizedale.”
“We’re concentrating on getting our new Focus ready for the next BTRDA championship round in Somerset now, hopefully the engine parts we need will be sorted and fitted. We don’t have a lot of time but we’ll do our best to be on the start line in Minehead.”
The Somerset Stages, round 3 of the BTRDA rally championship, takes place on 12th April.
Posted by GS at 22:13