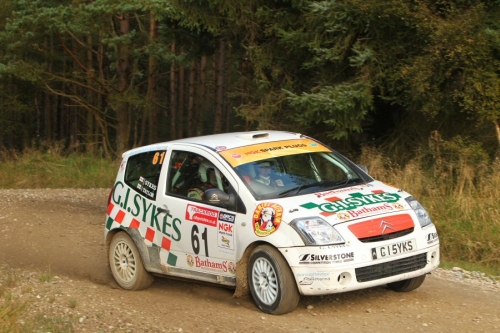 2012 BRC Challenge champion Richard Sykes is all set for the opening round of this year’s championship, the Rally North Wales Challenge, as he seeks to become the first driver ever to defend the closely-fought title.

Sykes will drive his usual Citroën C2 R2 Max with support from Bathams Brewery, G I Sykes, Boroughbridge Marina and Silverstone Tyres and he will have Simon Taylor in the co-driving seat again.

“The car has been fully rebuilt by Simon Hawthorne at G I Sykes Rally Preparations after our misdemeanour on the Mull rally at the end of last year,” said Sykes. “It’s been a few months since we competed and I can’t wait to get to the start line. We’re quietly confident for Rally North Wales and our objective for the weekend is to finish on the podium and score some valuable points to start the season at the right end of the leaderboard.”

“It will be the 8th year that Simon has co-driven for me and we’ve built up a formidable relationship. Our rally team is full of confidence and experience and we’ll be giving our all to try and win the championship again, something that nobody else has ever achieved. We’re fortunate that Bathams Brewery, Boroughbridge Marina, G I Sykes and Silverstone Tyres have all continued their support of the team this year and I am very grateful for that.”

The Rally North Wales Challenge will start from Welshpool on Saturday and the Challenge crews will face around 50 miles of competition on the fast gravel tracks of Dyfi and Gartheiniog forests.