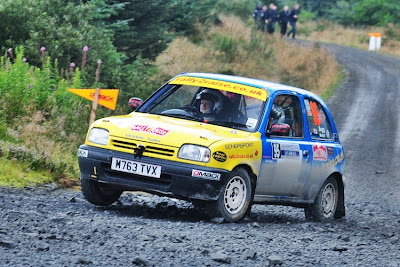 After a highly successful 2012 which saw £2,500 raised for four charities the Rally2Raise rally team are hoping to contest up to five rounds of the ARR Craib Scottish Rally Championship (SRC) this season to help continue their funds and awareness raising project.
For 2013 Rally2Raise is continuing its support of the Nystagmus Network and it will also raise awareness of the Bottle Stop campaign. Driver Rachel Clark, from Aberdeen, has already used the Rally2Raise Nissan Micra on two events this season, running as course car on the E.Watson and Son Coneyhatch rally sprint in January and the Edradour Saltire Classic rally in March. Fundraising for the Nystagmus Network has got off to a good start with over £250 raised from a raffle that was held at the Saltire.


After taking part in selected SRC rounds last year Clark and co-driver Katherine Begg, from Heysham, are aiming to contest five rounds this year starting with Clark’s home event, the Coltel Granite City rally in April.
“Rally2Raise did really well last year and thanks to all our supporters we raised £2,500 for the causes we were helping, hopefully we can do even better this year,” said Clark. “Ideally we’d like to do five SRC rounds but that will depend on us getting the budget together to enter the events.”

“We’re selling advertising space on the car and other promotional opportunities so if any company can help us please get in touch via rally2raise@gmail.com. Katherine and myself are planning on dying our hair bright red for the Granite City rally so we are sure to get noticed and get publicity! We’re also willing to sell advertising on our cheeks!”

More information on the project can be found at www.rally2raise.co.uk or www.facebook.com/rally2raise.
Posted by GS at 18:36