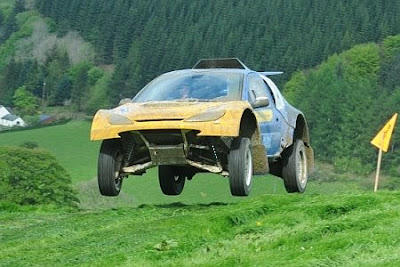 Two days of tough competition saw Tim Dilworth take victory in round two of the Britpart MSA British Cross Country Championship which was held on farmland and forest tracks at Radnor. Round one winner Richard Kershaw took second place, 37 seconds behind, with Dan Lofthouse in third.

"Day one went very well, we had a few problems with the exhaust but otherwise it was troublefree,” said Dilworth. “The track was absolutely brilliant with some very fast parts and some technical bits as well.”

Day two dawned bright and sunny and Dilworth and Kershaw traded fastest times on the drying track but despite a late charge Kershaw could not challenge for victory.

“We had a difficult weekend with some problems on the car,” Kershaw said. “It’s been a good weekend’s racing though, a fantastic event on a good course.”

Dilworth was delighted with his victory after having problems with his car on several previous events. “It’s been a long time coming, it was nice to give Richard a run for his money,” he said. “I was at the Higgins Rally School last weekend and the tuition seems to have paid off!”

Lofthouse took a solid third place in his Lofthouse Proto LD4. “I’m pretty happy with the result, the guys in front were setting blistering times. We couldn’t catch them so decided to play safe.”

Chris Hammond was fourth in his Milner R5 after an event-long battle with Martin Gould. “It’s more points in the bag for the championship, we had a good event and the track had a mix of everything which was excellent, a credit to the organisers.”

Bob Seaman took victory in Trophy class in his Milner R4 from Paul Myers in the Britpart 100. Dave Marsh won the Clubman event in a QT Wildcat.