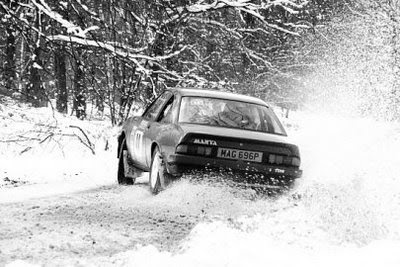 The BTRDA rally championship got underway last weekend with the Chepstow based Wyedean Forest Rally.

Heavy snow in the days before the rally had made the stages very slippery and conditions were difficult for the 180 crews who started the event.

The rally consisted of six stages with the bulk of the mileage in the Forest of Dean.

Nik Elsmore won the event in his Mitsubishi Evo ahead of the similar car of Daniel Barry. Last years winning crew, Andrew Burton and Shelley Rogerson completed the top three.

Julian Wilkes won the 1400’s in his Vauxhall Nova with Theo Bengrey victorious in the historic section of the rally in an Opel Ascona. Mad Mick Jones in his Mk2 Escort won the Silver Star category.

With Elsmore and Barry not registered for points it is Burton and Rogerson who head the championship tables after round 1.
Posted by GS at 02:56