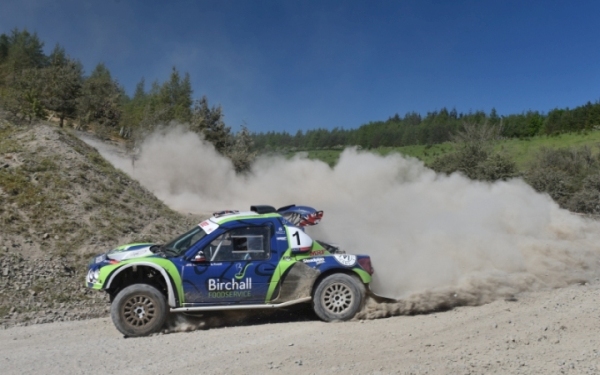 After a Covid-enforced absence the Britpart British Cross Country Championship (BXCC) will commence next weekend when some of the quickest offroad crews in the UK contest the opening round near Tong in Yorkshire.

The 2020 BXCC was completely cancelled and the first two scheduled events for 2021 were also not allowed to take place but, with an easing of restrictions, a four round championship is now planned with events at Sweet Lamb, Kielder and Walters in addition to Tong.

2019 champion Justin Birchall will be defending his title in his Lofthouse M3. He’ll have a new co-driver this season with Andy Powell joining the team. They contested their first event together in May, taking third overall at NORC Pickering.

Also racing a Lofthouse will be Martin James who was planning on having his partner navigating for him.

“Unfortunately the logistics of getting to Yorkshire have meant my plans have changed,” said James. “Matt Lowe will be navigating for me now as, due to her work, my partner Chas won’t be able to get to the event in time. We’ve had to do a few tweaks to the car and change the seat for Matt. It’s sad that Chas can’t make it but it will be interesting having someone of Matt’s experience alongside me.”

One of the several new drivers to the BXCC this season is George Bryson who is more known for his stage rallying exploits. Bryson will be racing a Warrior Audoo Quattro.

“After many many years of stage rallying we changed to off-road racing five years ago,” said Bryson. “We marshalled at a few events to get a feel for it and to meet some of the people involved. We decided to go for it in 2016 and entered the Borders Hill Rally before I’d even bought a car!”

“We have really enjoyed the change in disciplines and, with the BXCC events being two days and sometimes over 100 miles of competition, we think it provides fantastic value for money. There’s a wide range of competitors with varying budgets but one common thing we have found is how friendly everyone is and how competitors help each other out.”

“I bought the Warrior ready for the 2020 BXCC and I drove it at a test day over a year ago and haven’t driven it since so it will be a real quick learning curve at Tong! I’m not expecting to be anywhere near the pace but I’m determined to just enjoy it this season along with a return to historic rallying.”

Jasmine Philpott will also be racing a Warrior, with Peter Widdop co-driving. Philpott has already been racing this season, most recently at the NORC event at Pickering. Unfortunately this event didn’t go quite to plan.

Widdop commented: “There were a lot of issues after a broken rear diff on the first run at Pickering and then the car rolled on the last run. New doors have been fitted and the car is now in a million bits but it will be ready for Tong, hopefully we will have a clear run.”

Cumbrian driver Mike Wilson will be giving his new Polaris its BXCC debut and he’ll have Ian Letman navigating as usual. Wilson will also be debuting his new luxury accommodation.

“A trusty Ducato van did us proud for five seasons but we’ve replaced it with a new truck which accommodates both car and crew,” said Wilson. “It seems such a long time since we were last out and I am sure there will be a degree of rust on both driver and navigator but after a couple of runs we will find our feet.”

Wilson’s old Freelander is now in the hands of father and son team Sean and Reece Mathieson who’ll be sharing driving duties. Both have experience of navigating in the BXCC but it will be their first time driving.

The event will start at 12pm on Saturday 12th June with competitors racing until around 6pm. There will be further action on Sunday with prize-giving expected to be at around 4pm

Please visit crosscountryuk.org for information about the BXCC.