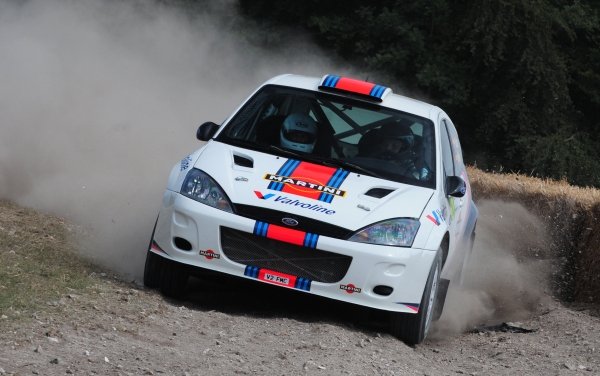 Bentham-based rally driver David Wright will take on the stars of the World Rally Championship next weekend when he competes in the prestigious Goodwood Festival of Speed.

It is the fourth time that Wright has been invited to the event, which runs in the grounds of Goodwood House in West Sussex. He will use his ex-Carlos Sainz Ford Focus WRC which will be backed by Kumho Tyres and Grove Hill Garage. The car has been prepared for the event by Giles Philips Motorsport.

“It’s a huge honour to be invited to take part in the event,” said Wright. “The forest rally stage will see a variety of cars running with everything from classic 1960s Minis to the latest World Rally Championship machines. Britain’s two world championship drivers, Elfyn Evans and Kris Meeke, will be there so it’ll be interesting to see how my times compare to them.”

“We’ll be using the same Ford Focus that we used on the Malcolm Wilson rally earlier this year. We also used the car at Goodwood last year. It’s a brilliant event – as well as the rally stage there is also a hillclimb course has an entry including several Formula 1 cars. There’s usually a good mix of celebs there too!“

Wright will be one of several International Rally Drivers Club members at the event, with others including Shelly Taunt, whose car has just arrived back in the UK after she competed on Rally Barbados.

The Festival of Speed starts on Friday morning with the action continuing on Saturday and Sunday.