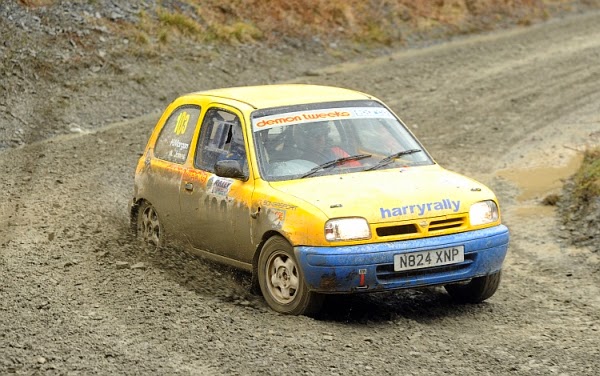 Bangor on Dee rally driver Harry Morgan enjoyed a hugely successful return to competition last weekend when he finished third in class on Rally North Wales. Morgan had not contested a rally since 2011, having taken time out to extensively upgrade his Nissan Micra.

Conditions were not ideal as heavy rain made the forest rally stages treacherous but Morgan made a good start, finishing the opening Gartheiniog stage fourth in class. Morgan continued to show place in stages two and three, maintaining his fourth place.

“Stage one went very well considering the driver was rather rusty and the co-driver had not used pacenotes before,” said Morgan.  “We had a few slides but I was very pleased to be in fourth and within 10 seconds of the class leader.”

“The second stage, Big Ray, was another good stage. I started to get to grips with the power of the new engine – I replaced the previous 1.0 engine with a much more powerful 1.4 version. We had one mishap in the stage, or rather just after it! We crossed the finish line at speed and immediately put the car into a ditch. Fortunately the car had no major damage and, as we’d already crossed the line, it didn’t cost us any stage time although it meant we were very tight on time on the road section.”

“After the drama at the end of stage two we took stage three a bit easier and made it back to service.”

Stage four, a second run through Gartheiniog, almost saw Morgan’s event end as a timber-lined bend caught him out, sending the Micra into a ditch. Fortunately he escaped with the loss of a small amount of time and his rear bumper. Stages five and six went more smoothly and Morgan had moved up to third in class at the event finish.

“We were lucky to not lose more in the stage four incident. We managed to really get into the swing of things in stages five and six, the car ran really well and we put in some good times.”

“I’m delighted to have finished third in class, I’ve put a lot of work into upgrading the car and I’ve been itching to get out in it and seeing how the new engine performs. Thanks to my service crew of Dad and Steve and all our family and friends that supported us on the event. Thanks also to the organisers and marshals on the rally, it was a great event and I’ll make sure I’m back for next year!”