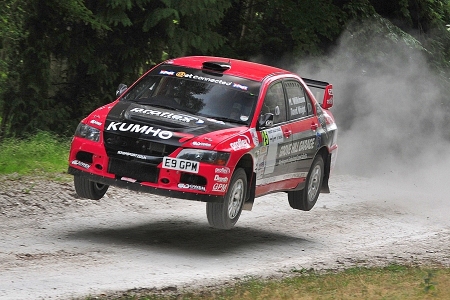 Bentham's David Wright enjoyed a very successful Goodwood Festival of Speed event last weekend when he set the third fastest time of the weekend behind two drivers who compete across the world.

It was Wright's second time at the prestigious festival which takes place in the grounds of Lord March's Goodwood House in Sussex. Having beaten several world rally cars last year Wright was invited back to the event by the International Rally Drivers Club.

With the course cutting up and the Evo running on old tyres Wright did not push too hard for a fast time on Saturday and Sunday but he was still quick enough to be third fastest, an excellent result against the factory cars.

"It was a brilliant weekend," said Wright. "The Goodwood rally stage is very challenging and the surface is much more slippery than the forests I usually compete in.  We put in some good times, especially on Friday, and it was great to be on the pace of Mikko."

"I did several runs with VIP guests of the BlackRock drivers' club which was very enjoyable. The weather was amazing although it made conditions in the car very tough."

"Thanks to the IRDC and Goodwood for the invite, it's the best event of the year and hopefully we will get an invite next year too."

Wright is hoping to return to BTRDA rally championship action in September on the Woodpecker Stages event in Ludlow.