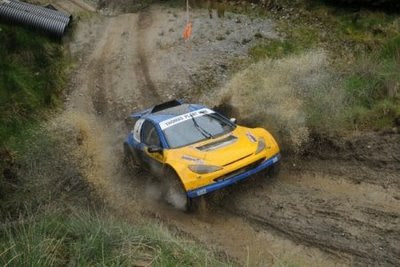 Kershaw took the lead on the opening run of the event with Dan Lofthouse in second and Martin Gould in third as Dilworth struggled with a puncture. By run four Dilworth had got back to third place and he was soon up to second after a dramatic fifth run where Lofthouse retired after breaking his gearbox while towing Gould’s Mattserati which had stopped, blocking the stage, with mechanical problems.

Dilworth narrowly avoid a stage maximum on run seven when a wheel broke shortly after crossing the finish line. His good fortune continued on the last run of Saturday when Kershaw lost nearly two minutes giving Dilworth the lead.

Day two opened with Dilworth extending his lead on the first two runs before a puncture saw Kershaw claw back 15 seconds. Kershaw raced through the final run to make up a further 20 seconds but it was not enough to take victory.

"I’m ecstatic with the win and happy to get to the finish," said Dilworth. "The course was very testing and tough on the car but the service crew kept us going."

Bridgenorth’s Rochelle was delighted with his third place. "The course was fantastic, we came out of each run smiling and we thoroughly enjoyed the weekend. The weather was great too! I’m pleased to be getting on the pace and there’s more to come from both me and the car, hopefully we can catch up with those Peugeots."

Further down the leaderboard Chris Hammond suffered broken suspension on day one but found some spare parts to allow him to continue and recover to sixth overall while Greg Macleod was fortunate to escape from a high speed off on one of the long straights during run 7 on Saturday. The combined efforts of the Difflock and Solway recovery units saw the car retrieved from the trees and Greg was back out again on Sunday, taking 12th place.

The Trophy rally was won by Bob Seaman after an eventful two days. "The steering wheel came off on one run and the brakes failed on another so I’m very happy to have got to the end and taken the Trophy win. The course was fabulous, some rough parts and technical stuff together with some smooth and very fast sections."