BCCC finale to be held at Walters Arena 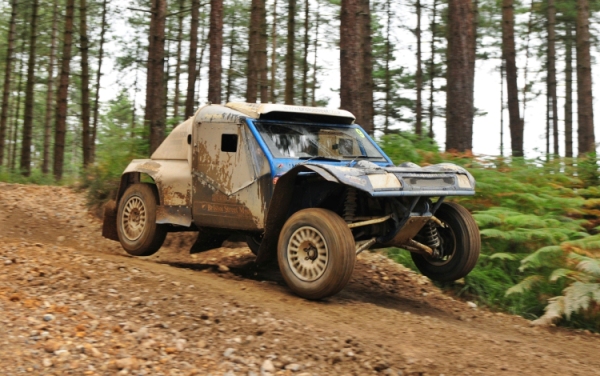 The final round of the Britpart MSA British Cross Country Championship, with support from Ravenol, takes place next weekend at Walters Arena in South Wales.

Warrington's Mike Moran wrapped up his second BCCC title at the previous round and, having sold his car, he will not be driving at Walters. Moran's car has been bought by Rob Bool who has entered the Walters event ahead of a possible championship campaign next year. Both Moran and his co-driver Tony Coid will be on hand at Walters to sit with Bool as he learns his new machine.

"It was quite sad seeing the car go to a new owner," said Moran. "We've used it in the BCCC for five years and it has served us very well. We finished third in  2012 when the car had a diesel engine, the best ever BCCC finish for a diesel racer. We had to drive it hard to keep the engine on boost and that meant we spent a lot of time narrowly missing big accidents!"

"After a huge party at the awards do a plan was hatched to swap to a 440bhp petrol Jaguar engine for 2013. We nearly finished second that year but cutting a corner too much at the final round broke both the steering rack and my finger."

"The car has been faultless in 2014 and 2015 and that has meant we have been able to take back to back title wins. I'm in my late 50s now but I've still got the competitive spirit so I'll be back next year in a new lighter car which will once again be prepared by Lofthouse Motorsport."

Walters should see a close battle for the remaining championship podium positions. Andy Powell is currently second on 347 points, just 10 ahead of Mark Jacques with Richard Green in fourth with 332 points. In fifth and sixth place are Ryan Cooke and Neil Davey respectively but with both those crews already having a retirement this season they will be able to count all the points they score at the weekend unlike the other drivers who have scored points in all the events so far.


Powell commented: "I'm looking to have a good last round, the car is almost ready, it just needs the diff rebuilt and fitted. I was not on the ball at Bovington and I didn't get a decent result. I like Walters, there's a good selection of routes. Once dropped scores are taken into account it is very close for second place so there should be a great battle."
Another driver looking to round of his season in style is Paul Harris in his Bristol Street Motors-supported GSR Maxilight. Harris is currently in 11th place in the championship standings after a few mechanical issues with his car.

"We're having the shockers rebuilt ahead of the final round," said Harris. "I'm looking forward to renewing the class battle I've been having with Richard Green and Steve Smith all season, it should be a great end to the season."

In the BCC Trophy Nick Pritchard leads the way on 332 points with Steve Anning in seconds on 247 and Sian Rogers in third on 231.

Ian Linford heads the Freelander Challenge battle with 299 points, 50 ahead of Andy Price. Louisa Felice in in third with 233. The Freelander crews will be joined by new entrant Richard Roberts for the final round.

Spectators are welcome at the event, the action will start at 11am on Saturday with Sunday scheduled to start at 9am. Further spectator information is available at www.marches4x4.com/spectators.


The organisers are already hard at work planning the 2016 championships with a provisional calendar set to be announced shortly. Any crews interested in competing next year can register to receive regulations by contacting Lilian Turley at lilianturley@btinternet.com.
Posted by GS at 11:28